West Hall care home in West Byfleet have planted a special apple tree native to the town to mark the centenary of the end of the First World War. 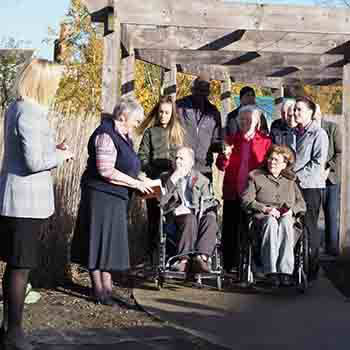 On Tuesday 13 November at 11.15am, residents and staff at Anchor’s West Hall care home, off Parvis Road, stopped what they were doing to mark 100 years since Armistice Day and remember the past.

West Hall planted a specially commissioned “Byfleet Seedling” in remembrance of all the brave souls both abroad and at home.

George Carpenter, the former head gardener at West Hall, and his staff developed three new apples, including the Byfleet Seedling in 1915. His great niece and nephew were guests of honour at the ceremony.

West Hall’s Manager Tracy Manzi said: “We began our remembrance service at West Hall with a two-minute silence and then Karen Potash and Mike Bentley, the great-great niece and great-great nephew of George Carpenter, helped plant the Byfleet Seedling, which has been grafted to enable us to bring it back to its origins.

“It is important to remember all those who died in previous wars as a way to thank them for their courage. The older people we work with have set the foundation for future generations.

“And that’s why we organised this event. It means so much to our residents.”