Managers of the Anchor care homes which gained an ‘outstanding’ rating from the Care Quality Commission came together for a formal gathering today where they each received their due recognition from CEO Jane Ashcroft. 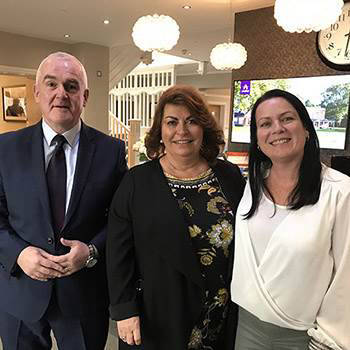 The event, held at Anchor’s flagship location, and of course one of the ‘outstanding’ homes itself, West Hall in Surrey was also being held for them to discuss their experiences on how Anchor has achieved the top rating, and to share best practice with Anchor’s care homes.

Four homes now have an overall ‘outstanding’ – with three of those achieved in quick succession since August 2017. They are:

A further three Anchor homes have an ‘outstanding’ in one or more of the five domains inspected by the CQC. Those homes are:

Anchor – which celebrates its 50th anniversary this year, now has more than three-quarters of its homes either rated ‘good’ or ‘outstanding’, and is the most compliant large provider of residential care in England.

Anchor Chief Executive Jane Ashcroft CBE said: ‘This is one of the great perks of being CEO: I get to present a reward to four managers you have achieved this outstanding work – and there is no better word for it.  To Neil, Rebecca, Tracy and Marcia, I take terrific pleasure in saying well done and thank you – you and your hard working teams are a credit to Anchor’.

Neil McCalley, manager of St Anne’s commented: ‘This has been a great day for me personally but I must praise my fantastic team in Saltash who have been right behind me seven days a week.  I am very lucky in that we have a lovely group of residents, and for whom looking after has proved an absolute pleasure’.