Resident Marjorie Winn from Augusta Court care home in Chichester celebrates her 100th birthday. Marjorie's personal story of fleeing persecution inspired her in her job with the UN. 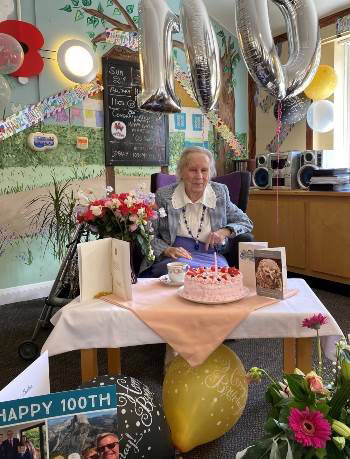 Marjorie celebrated with friends and family at the party held for her Augusta Court where she has lived for three years.

Great grandmother Marjorie was born in the port city of Izmir, Turkey, then part of the Ottoman Empire, but escaped with her parents and younger brother in 1922 to avoid the massacre of tens of thousands of residents, and an inferno which swept through the whole city during the conflict between Greece and Turkey.

Her father was a British diplomat, and her mother was a French-Venetian aristocrat so was brought up speaking English and French, and remained bilingual all of her life. She spent eight years of her childhood in Damascus and studied at the French lycee where she was very happy. After school at St Mary’s Ascot, and St James’ secretarial course in London, she joined her parents in Salonica, northern Greece, until the Germans invaded in 1941.

She had met her future husband Raymond Blackler in Greece and they were married in Cairo in June 1941. She worked at the British Embassy as the confidential private secretary to the second in command, and typed the letter to King Farouk demanding his abdication.

Her daughter Valerie was born there. After her husband was wounded he was posted back to Greece to report on the Greek civil war for the British Government as he was also fluent in Greek and French. His report was read out by Churchill in Parliament. 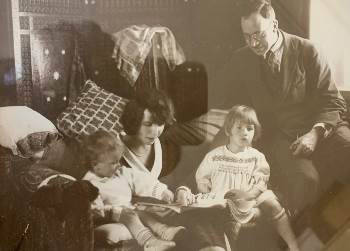 Unfortunately, the marriage did not last, and later Marjorie came back to England.

She embarked on a new life in Beirut working as a bilingual secretary at the UN for The Rehabilitation of the Palestinian Refugees, which she loved. It was there she met her future husband. Bill was a naval commander studying Arabic at the school at Shemlaan, which was a haunt for spies! They were married in 1952, and their daughter Judith was born later in England. In 1963 they moved to Bosham. Tragically Bill died in 1969.

Later, Marjorie worked for several years at the UN in Geneva before moving with her mother to Chichester in 1963 after the death of her father. She has remained there ever since. She is a keen gardener and loves her roses. Marjorie was a fine bridge player winning several tournaments here and abroad.

Augusta Court Manager Marcin Szczepaniak said: “Majorie is a lovely person, and we feel so privileged to care for her here after she has done so much to help others in her life. She definitely makes the most of life and loves taking part in the many activities in the home, especially dancing and the wine tasting sessions organised by staff. We all wish her a very happy birthday.”