One of Leatherhead’s oldest residents will be celebrating his 103rd birthday on Wednesday (7 August). 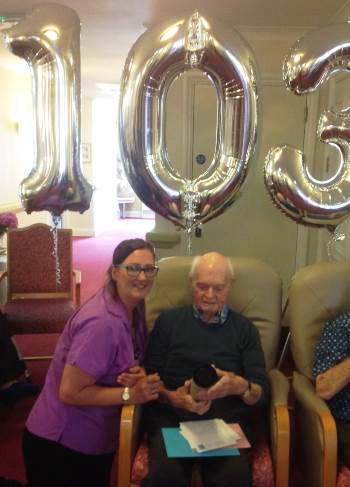 War veteran Bruce McLatchie, who lives at The Beeches care home in Fortyfoot Road will be the guest of honour at a party with friends and staff.

Centenarian Bruce, who lived with his wife, Irene, at the Anchor-run care home up until she passed away, attributed his longevity to appreciating life and the kindness of other people.

Croydon-born Bruce served in the army during the Second World War, helping to liberate Italy. Being responsible for repairing radar faults, Bruce was also stationed in North Africa, spending a short time in Egypt.

Bruce, who speaks French, Italian and a little Arabic and Russian, said: “My most exciting time was when I was stationed in North Africa and Italy. I loved Italy the most and the Italian people.”

After the end of the Second World War, he moved back to London where he worked in the civil service and then moved with his job to Farnham in Surrey.

Bruce said this was his third birthday he had celebrated at The Beeches since he moved to the home in 2016.

He said: “It’s amazing to reach my 103rd birthday. That’s due in part to the kindness of staff here. They do a jolly good job in sometimes challenging situations. It’s always interesting here and I like meeting new people.”

Michelle Daniels, Manager of The Beeches, said: “Bruce is a lovely person. He always has a kind word for everyone including staff. He is always smiling and has a great sense of humour.

“We wanted to make his birthday special so during the party we have organised for his favourite singer Georgina to entertain everyone before we present him with a big birthday cake.”

The Beeches Manager Michelle Daniels is photographed with Bruce McLatchie who received a bottle of whisky from Anchor’s Chief Executive Jane Ashcroft for his 103rd birthday party.