Devonshire House care home in Cavendish which used to be the family home of Sue Ryder has dedicated a room in her memory.

At a private ceremony on Saturday (2 February), carers at Anchor’s Devonshire House in the High Street were joined by members of The Lady Ryder of Warsaw Memorial Trust (LRWMT) and her son Jeromy and daughter Elizabeth for the official opening of the Remembrance Room. 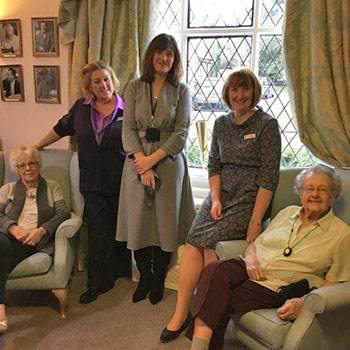 Staff have been working with the Trust to include items which celebrate the life of Lady Ryder whose bravery and determination saved the lives of many survivors of the Nazi concentration camps in Poland and helped sick and disabled people.

Karen Curle, Manager of Anchor’s Devonshire House, said that staff at the home were proud of its connection with Lady Ryder.

She said: “This important event will highlight Lady Ryder’s courage and hard work to help the death camp survivors try to reclaim their lives in the beautiful grounds which include rose gardens and a lake where they used to fish.

“She was so successful that many of them stayed on as volunteers to help other survivors.”

The event will also serve as a reminder to people more than 80 years on the horrors of the concentration camps.

It follows a study to mark Holocaust Memorial Day last month which found that 5% of adults in the UK don’t believe the Holocaust took place and one in 12 believes its scale has been exaggerated.

Karen added: “Our residents have already said how interested they are to find out about Lady Ryder and we hope that members of the local community will visit Anchor’s Devonshire House when we open the Remembrance Room to the public later this year.”

LRWMT Trustee Michael Cutting said he was delighted the room had been dedicated to Lady Ryder.

He said: “This house, which originally belonged to her mother, was not only a home for so many sick and disabled people, but also the headquarters of the Sue Ryder Foundation which at the time of her death had more than 80 homes across the world and more than 500 Sue Ryder Shops in the UK.”

He added that in the building there was a small flat upstairs where Lady Ryder and her husband Group Captain Leonard Cheshire VC lived, in great simplicity, with their two children.

Mr Cutting added: “The first patients who came to the home were survivors from the concentration camps of the Second World War who were brought to Cavendish by Sue Ryder herself.

“She had no money, but it was an act of faith.  From that precarious beginning, her Foundation grew. It was her living memorial to the millions who died in the two World Wars. Thousands of individuals across the world were either helped by her or inspired by her to join her in this work.”