Two apprentices at Landemere care home were so moved by the plight of homeless people in Sinfin that they have collected three boxes of blankets, toiletries and food for them. 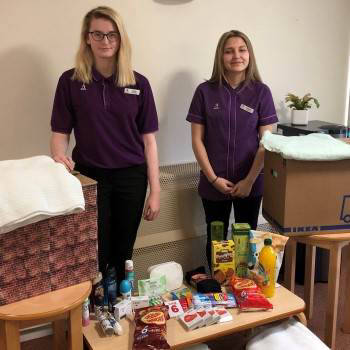 Molly said: “I felt that not enough was being done to support homeless people in Sinfin so I chose this week to highlight the great work apprentices do in care homes while also helping the most needy in the local community.

“Every day I help older people from Sinfin so I know what a positive impact I’ve had on their lives. I wanted to do the same for the town’s homeless people.

“I’m so pleased with the response. Staff and the families of residents at Anchor’s Landeremere have donated clothes.”

Molly and Natalia, who have been apprentices since October last year, said they wanted to work in the care sector because they wanted to help older people.

Natalia said: “Older people have done so much for society when they were younger so I wanted to give something back. Working in care has given me the opportunity to develop as a person and help society’s most vulnerable people. This homeless appeal is an extension of that.

“Every day is different and I feel I’m making a positive contribution to the wellbeing of the older people living here.”

Anchor’s apprenticeship scheme, which has been running since 2015, has won many awards, including the Rate My Apprenticeship Award 2017, which saw apprentices from across the UK rate their apprenticeship, basing their views on how valued they feel, the support they get on programme, development opportunities and how much they earn.

The apprenticeship scheme is one of the initiatives Anchor has adopted to help professionalise the care sector and to address the predicted one million shortfall of carers by 2025.

Our apprenticeships are a fantastic opportunity for 16 to 24 year olds who really
want to make a difference to the lives of older people.

Find out more about our apprenticeships