An older couple from a Wetherby care home have offered romantic advice to young couples celebrating Valentine’s Day this week. 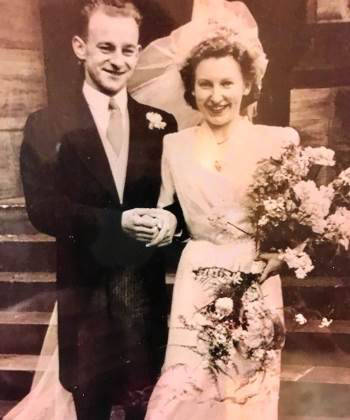 Arnold and Rita Bradbury, who have been married for 72 years, said the secret to their marriage was to always listen to each other and make decisions together.

Great grandfather Arnold, 96, who has lived with Rita, 95, at Anchor’s Wetherby Manor in St James Street since 2015, said: “Our most romantic day was our wedding day and since then every day has been special.

“We have had a successful marriage because we are both easy going, rarely argue and always talk things through together. It helps that we have a shared interest in playing golf and travelling abroad."

“Valentine’s Day is a chance to show you care for someone you love and we are still in love after 72 years of marriage.”

Rita agreed the advice she would give to young couples were to never argue and be prepared to compromise and always respect your partner’s opinion.

Arnold first met Rita at the College of Commerce in Leeds when he was 16 and happened to bump into her in central Leeds several years later. They agreed to meet up for lunch and so began their relationship.

Arnold and Rita, who were in the Fleet Air Arms Division and The Wrens respectively, were married at St Edmonds Church in Roundhay, Leeds, after the Second World War. He joined the family business and studied to be a chartered accountant while Rita was a secretary. They have two sons, five grandchildren and two great grandchildren.

Arnold and Rita will be joining their friends at Wetherby Manor for a day of Valentine-themed events on Friday (14 February), including Valentine flower arranging, quizzes, and meals. Staff will be dressing in red, Wetherby Manor’s Activities Co-ordinator Janet Aston will decorate heart shaped cakes for the residents and a male singer will serenade all the female residents before handing them red roses.

Wetherby Manor Manager Judith Scurr said the Valentine’s party was part of a packed programme of activities at the care home.

She said: “This is such an exciting event. There will be lots of fun, colour and wonderful food all made from fresh seasonal ingredients. Older people have a life time of experience when it comes to love so it’s great Arnold and Rita can offer younger couples advice.

“The party is part of Wetherby Manor’s ongoing programme of interesting activities which aim to stimulate the residents physically and mentally. Such events are also a great occasion for residents to socialise with friends and their families.”