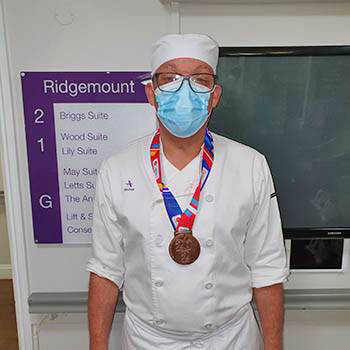 He has worked at the care home for over 15 months and decided to use the opportunity to support residents by fundraising for an interactive table which is specially tailored to be used for people living with dementia. The table, made by Inspired Inspirations, uses unique interactive experiences to engage people living with mid- to late-stage dementia. It comes with pre-installed brain training and memory apps along with a variety of games and puzzles. Matt raised £905 which will go towards the purchase of the interactive table.

Running the London Marathon has been an ambition of Matt’s since he overheard his neighbour was doing it over 30 years ago.

I truly don’t know what got me to the finish line but as I turned the corner in front of Buckingham Palace, it felt like I was running on air and I couldn’t feel the road surface under my feet. As I crossed the finish line, I was so happy and relieved, I knew that I had completed a life goal.

Over the past few months, Matt had been very busy training for the marathon and colleagues and residents of Ridgemount care home have been cheering Matt on every step of the way. Matt also received advice from residents across the country who had previously run marathons via video calls.

Garry Hill, Wellness Coordinator at Anchor Hanover, had been keeping up with Matt’s progress and expressed his joy at Matt achieving his goal.

Matt has gone from leaps to bounds with his training and it has been exciting to see his progress. Running a marathon is quite an achievement. Congratulations Matt!

Matt completed the marathon in five hours and 33 minutes. For him, running the marathon was not just about the physical feat but also a way to go above and beyond to support residents’ wellbeing.

Working in a care home as a Chef is quite different from other catering positions I’ve had and I truly love it. Our residents deserve the absolute best and I always want to do whatever I can within and beyond my role to support them. All through the marathon, I thought about the money I had raised and the fantastic support everyone has given me, it genuinely helped get me round and made the whole experience truly unforgettable.