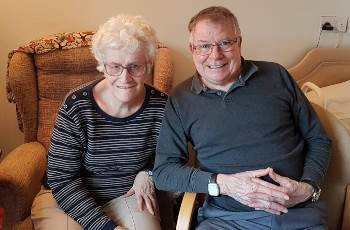 Former athletes Maureen and Harry Leeming, who have been married for 52 years, said the secret to their marriage was to have shared interests or ambitions which they worked towards together.

Maureen and Harry, who are aged 75 and 74 respectively, met at a sports dinner when they were 19: Harry was a marathon runner and Maureen was a sprinter.

Grandmother Maureen, who has lived at Anchor’s Borrage House care home in Borrage Lane since September last year, said: “Our most romantic day was our wedding day and since then every day has been special. We are still in love after 52 years of marriage.”

Harry, who was often in the local newspaper when he was young athlete, said for a marriage to be successful, both partners need to be strong and stick together when life gets difficult.

Maureen and Harry were married in St Mary’s Church in Chaddesdon, Derbyshire, and have one daughter, Karen, and two grandchildren, Rebecca and Zak.

Borrage House Manager Sarah Aitken said everyone could benefit from the lessons older people had learnt in their relationships.

She said: “Older people have a lifetime of experience when it comes to love so it’s great Maureen and Harry can offer younger couples advice.”