A Second World War veteran living in a Leeds care home will be honoured during a special celebration to mark the 75th anniversary of VE day this Friday. 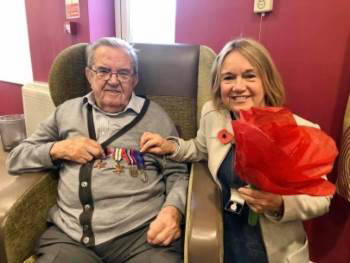 Sergeant Stanley Richardson, 95, will be celebrating with fellow residents and care staff at Anchor’s Primrose Court care home on Orchard Way. Stanley, who served in the 1st Battalion, the Duke of Wellington’s division, enlisted as a private but was promoted to Sergeant while seeing action in Anzio on the Italian front.

He said: “We shared a lot back then, the camaraderie between all of us was excellent. We would have done anything for each other. But there were some frightening and sad times, I saw my corporal killed just a few yards in front of me in Anzio.”

Stanley has previously taken part in memorial parades in Rome, hoped that on the 75th anniversary of the end of The War, people would remember the lessons the War taught everyone.

“I was only 18 when I was called up. It’s an early age to go to war and possibly not come back. I hope young people today remember the sacrifices we made.”

The care team at Primrose Court are looking forward to the day as a chance to do something fun for their residents as well as celebrating those who had lived through the War and had served both at home and overseas.

Joanne Lawrence, Manager of Primrose Court, said: “It is important to honour all those who served in all ways in previous wars and thank them for their courage. The older people who live with us have set the foundation for future generations, and it’s thanks to them that we can enjoy the freedoms we have. We have learned a lot from all of them. It is a privilege having Stanley living with us.”