A chef from a care home in Tipton has beaten off rivals to secure a place in the finals of a national catering competition. 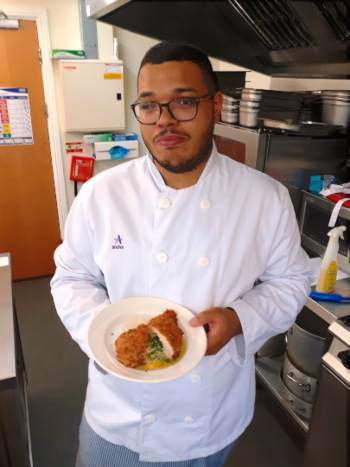 Nathan Hateley, 26, who has worked at Bloomfield Court care home in Central Avenue for five months, said he was thrilled to be among the top chefs in Anchor’s Chef of the Year award.

Nathan, whose talent meant he was quickly promoted from Catering Assistant to Deputy Chef Manager, will now face seven finalists from Anchor care homes across the country to see who gains the top place in the competition.

Each finalist will have two hours at the Grand Final on 5 September to prepare a fortified snack, which is packed with nutritious ingredients which help maintain residents’ healthy weights, and a two-course meal.

The final will be held at the University of Birmingham in the same kitchen where Nathan trained for his catering degree although he thinks this won’t give him an advantage over the other chefs.

The menu Nathan will be making for the final will be: chocolate brownies with avocado cream as his fortified snack while his main course will be Chicken Kiev served with fondant potato, green beans in streaky bacon with lemon tart served with fresh raspberries and raspberry coulis for dessert.

He said: “I’m really pleased to have reached the final but still surprised how quickly I’ve done so well in Bloomfield Court as well as in this competition.

“I was really pleased that during a taster session of my menu, staff and residents said they really enjoyed it. I just hope the judges like it, too!”

Competition judge and organiser Richard Herne, Anchor’s Catering Manager, said: “The Chef of the Year competition is highly competitive as the top chefs from Anchor’s 114 care homes fight it out to gain this prestigious title.

“Meals are an important milestone in the lives of our residents so making sure that we continually improve our standards is essential. The Chef of the Year helps with that as it’s an opportunity for our chefs to share ideas and recipes.

“Encouraging residents to eat a wholesome and seasonal diet which they enjoy helps them lead happy and healthy lives.”