A local Leeds man is celebrating turning 100 on Thursday, 4th June at a party at Anchor’s Berkeley Court care home on Chatsworth Road.

Centenarian Bob Tillotson will be blowing out his candles at the party held for him by the care team and fellow residents at Berkeley Court.

Bob joined the RAF in 1939 and rose to the rank of flight lieutenant with 1st Bomber Command. At the end of the war, Bob set up his own neon sign business and got a patent for a lighting creation he invented.

He also travelled extensively, particularly in Central America and the United States, where his family now live. However, always a true Lioner at heart, Bob returned to Leeds and became a resident at Berkeley Court in 2018.

Although his family were unable to leave the United States to join him, Bob’s friends and carers in Berkeley court have organised a wonderful event to celebrate his special day. Banners and bunting have been arranged for the day as well as a special birthday cake, which Bob is fully intending to share with fellow residents.

Bob will also be receiving a variety of personalised gifts including a book on the history of the RAF and a model Ferrari. 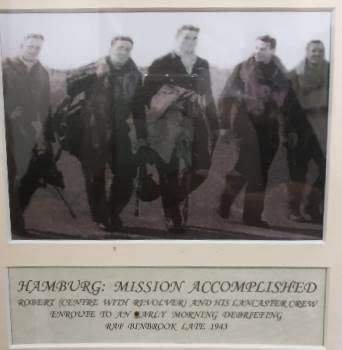 In addition to the gifts, Berkeley court have also arranged for a singer to serenade Bob and the other residents from the care home garden and Bob shall also be receiving his special telegraph from Her Majesty the Queen.

Mr Tillotson said: “I’m quite excited, it’s not every day you get to turn 100! I have to put my secret down to having a loving family and keeping strong and determined even through the toughest times. Even though they can’t be here with me, I know they will still be celebrating with me in spirit and I have all the wonderful people here at Berkeley Court to celebrate with me. I felt that, at the end of the war, we who served may have been forgotten but the kindness that everyone has shown me makes me feel more determined than ever!”

Carl Walmsley, manager of Anchor’s Berkeley Court, said: “Mr Tillotson is a lovely person and even though his family can’t be here for him we like to consider him part of our family. We’re delighted to be celebrating such a special day with him and we’re looking forward to having a nice celebration with cake and fun for Bob and all the residents!”.