Staff from a care home in Harehills have helped a dream come true for two rugby fans by organising a trip to the Rhinos’ Stadium on Thursday (23 May). 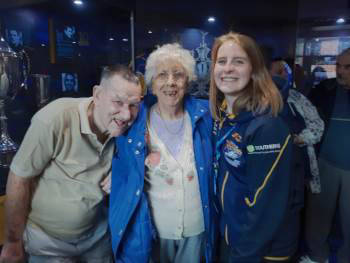 The team from Anchor’s Berkeley Court in Chatsworth Road will be taking Dorothy Ward, 94, who has dementia, and Donald Wilkinson, 91, to the stadium as part of the activities they have arranged for residents during Dementia Action Week.

Manager Krzysztof Bialczyk said the home prided itself on organising meaningful activities for their residents.

Krzysztof said: “Dorothy and Donald are avid rugby fans and we wanted to make their year by taking them to the Rhinos’ Stadium.

“We know that dementia affects short-term memory but visits like this associated with a person’s passion or hobby helps them access many happy memories.

“It might be they won’t remember a conversation or this visit but the positive emotions this creates will remain with them.

“The number of people living with dementia is growing and Anchor is leading the way with training its staff so we can help older people live well with the condition.”

Dorothy, who has lived at Berkeley Court for three years, said she was thrilled to be going to see the Rhinos.

She said: “My family and I have been season ticket holders for a long time. I was so excited to see the recently refurbished stand and to get to see the stadium again.”

Donald added:  “Leeds Rhinos have made growing old an absolute pleasure. I’ve always been a huge fan of theirs and I’m grateful I get to experience this. And the sunshine held out for us!”
Anchor has contributed to the Government’s national dementia strategy and is part of the Dementia Action Alliance.