Oakwood Grange  care home in Barnsley has organised for a pony to visit a resident who used to love riding as a teenager.

Staff at Anchor’s Oakwood Grange in Oakwood Road, Royston, wanted to make resident Cyril Goddard’s day by bringing in Leo the pony so he and the other residents could pat and stroke it. 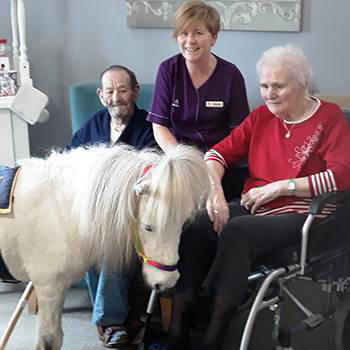 The idea for the pony visit came from Care Assistant Sharon Perriam who had found that residents had really responded well to previous visits from a husky dog.

Manager Mandy Smith said: “Studies have shown that the health of residents improves when they interact with pets which they can stroke.

“Residents with dementia and older people who used to own dogs were particularly responsive to the husky so Sharon thought she would organise the pony visit as something different in our packed activities programme. But also because we wanted to make Cyril’s day.

“He was really pleased to hear about this visit as he has many happy memories of riding holidays in Scarborough when he was younger.”

Cyril, 81, who has lived at Oakwood Grange for seven years, said it was the first time he had heard of a pony visiting a care home.

He added: “It is very good of the staff to organise this. I’ve been really looking forward to the visit. I have always been interested in animals and I used to ride horses as a teenager on holiday at Cayton Bay.”

Joan Silverwood, 79, has been equally excited about the pony visiting the home.

Grandmother Joan, who has lived at Oakwood Grange for four months, said: “It’s something different having a pony in the home, isn’t it?

“There’s always lots to do here. I really enjoy the activities in the home, especially the singers who come in and the beer tasting afternoon. The staff are very nice.”

Oakwood Grange is also taking part in Care Home Open Day on Saturday (21 April) where local communities across the country are invited to visit their local care home to see what life is like for residents and the activities organised for them.

The residents at the home will be serenaded by former X Factor singer Alan Turner while they tuck into a Union Jack afternoon tea in their dining room decorated with red, white and blue bunting as this year’s national open day mark’s the Queen’s 92nd birthday. Member of the public are welcome to join in the fun.