A Second World War veteran living at Silver Court care home in East Grinstead will be honoured during a special celebration to mark the 75th anniversary of VE Day this Friday. 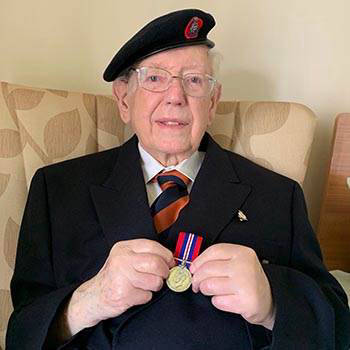 Cyril was called up in 1944 and was posted to join the Royal Sussex stationed in Iran.

Although the living conditions were quite sparse, Cyril recalls that “by pure coincidence I met three men from East Grinstead.

“They helped me learn the ropes and the locals were really friendly.

“It was an interesting experience going so far away but still seeing people from home.”

Cyril has always taken anniversaries of the war as a chance to remember his experiences with his comrades and reflect on how the war brought people from all walks of life together.

As he himself recalls, “At an anniversary dinner in 2002 I met a man from Australia who had been a pilot in the war and was planning to visit an old comrade down in Felbridge.

“He thought I would never have heard of it but it’s where my wife was born!”

The team at Silver Court are looking forward to celebrating Cyril and all those who lived through the war and served both at home and overseas.

Silver Court Manager Jane Baxter said: “It has been a privilege to have Cyril living with us. He and all the older people who live with us set an amazing example for future generations.

“We have learned a lot from all of them and it is thanks to their courage and sacrifices that we have the freedoms we enjoy today.”