After spending two months apart due to the coronavirus pandemic, a devoted couple have enjoyed an emotional reunion at Oulton Manor care home.

Colin and Jane Bagshaw have been married for 44 years but hadn’t seen each other since November, after Jane moved into a care home – the longest they’ve ever been away from each other since they first met. 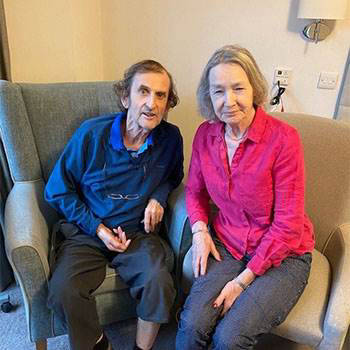 Jane has dementia and was being cared for by Colin at home, until he had a stroke and had to be admitted into hospital. Jane then moved into Oulton Manor care home in Leeds to receive the personalised care she needed. Due to government guidelines and adhering to coronavirus restrictions, the couple were unable to see each other for two months.

When Colin was discharged from hospital, he moved into Oulton Manor to be with his wife and receive care himself. After following Anchor Hanover’s safety procedures, the doting couple were finally able to reunite in a heartfelt meeting.

The reunion was particularly emotional for Jane who found it very difficult to be away from Colin, and asked after him every day they were apart. Since reuniting, they have been inseparable, and Jane’s mood has lifted immeasurably. They now plan to live together at Oulton Manor long-term and the dedicated care team is planning a special romantic meal for them on Valentine’s Day, to celebrate their love.

Jane and Colin grew up in Yorkshire before moving to Scarborough in retirement. When Colin was admitted to hospital, their families decided to move Jane back to Yorkshire to go into care so they could be close to their friends again.

The couple are glad to be back in a place with so many happy memories, and Colin has been sharing stories with the care team about when he and Jane first met in a pub in Morley. Colin remembers how he had to use his charm to attract the ‘beautiful’ Jane away from the many other suitors. Colin likes to joke that if he had been given a pound every time he visited Jane in Rothwell during their courtship, he would be a rich man.

They married on 4th April 1967, and had many adventures travelling the world together.

I have missed Jane so much; we have never been apart for so long. Getting to be with her again is all I wanted and seeing her looking so well is wonderful.

It was so lovely to see Colin and Jane reunite after so long apart. The change in Jane was remarkable – her face positively lit up when she saw him, and Colin’s been reminiscing a lot about when they first met and how he ‘smooth-talked’ her.

Inseparable for nearly 50 years of marriage, we are so relieved that Uncle Colin and Auntie Jane can be together again. It has been a tough few months due to poor health and the pandemic but finally Colin and Jane are together where they are most happy and can be cared for and safe. Thank you, Oulton Manor.

Oulton Manor is a contemporary residential care home set in luxurious surroundings located in the Oulton area of Leeds. Oulton Manor offers first class care and facilities with premium en-suite rooms for up to 77 residents, in a light and spacious setting. Looking for a care home for yourself or a loved one? Head to Oulton Manor's dedicated webpage or call us on 0113 282 8222.