A Second World War veteran living at Millfield care home in Oldham will be honoured during a special celebration to mark the 75th anniversary of VE day this Friday.

Signalman Eric Bradshaw, 95, will be celebrating with fellow residents and care staff at Anchor’s Millfield care home in Huddersfield Road 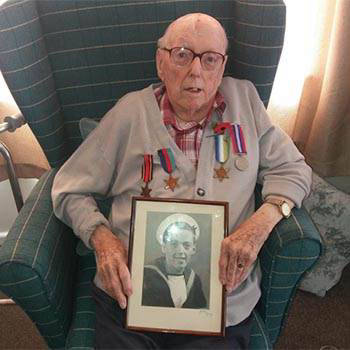 Eric, who enlisted in The Royal Navy at the age of 18 in 1943, saw service in Norway, The Far East and across the globe in his role sending and receiving messages while his ship was at sea.

He said: “The camaraderie among shipmates was really special and kept our fighting spirit up.

“It was a challenge being on the ship bridge and keeping up with signal movement and Morse code.

“But what I found hard was being so far from home, and losing friends and family was a tough experience.”

Eric, who has always made time to salute the fallen on VE Day, hoped that on the 75th anniversary of the end of the war, people would remember the lessons the war taught everyone.

He added: “I hope young ones today can learn from what we went through, and to be tolerant and always use their common sense.

“Hopefully people in the future will never have to go through what we did and make the sacrifices we made.”

The care team at Millfield are looking forward to the day as a chance to do something fun for their residents as well celebrating those who had lived through the War and had served both at home and overseas.

Julie Linke, Deputy Manager of Anchor’s Millfield, said: “It is important to honour all those who fought in previous wars to thank them for their courage.

“The older people who live with us have set the foundation for future generations, and it’s thanks to them that we can enjoy the freedoms we have. It’s a privilege having Eric living with us.”