Cook Russell Hesketh, from Heyberry House care home in Birkenhead was celebrating this week after winning the national final of Anchor’s Chef of the Year catering competition. 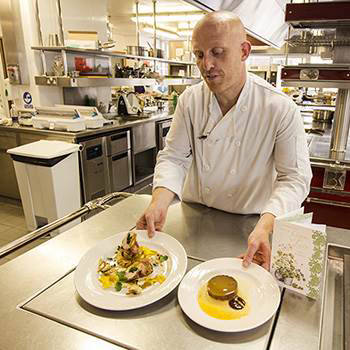 Russell, from Heyberry House, Ashville Road, Birkenhead, beat six other chefs in the Grand Final of Anchor’s Chef of the Year competition after his menus proved to be the best.

As part of the competition, Russell organised taster sessions with the residents of Heyberry House to see which two-course menu would best represent the home. The competition entry also included a meal for residents with dysphagia who have eating difficulties.

Russell won a two-hour cook-off at the competition kitchens at University College Birmingham against the other finalists in front of the judges and well-wishers.

The Anchor judges were: National Care Quality Manager Rob Martin, Catering Manager Richard Herne, who specialises in catering for those with dysphagia, and Head of Care Maria Bamford. All the dishes were examples of food the chefs serve to residents in their care homes.

“I am so pleased to have won as this was a really tough competition.  I can’t wait to get back to Heyberry House to show the residents the trophy and treat them to something special food-wise”, said a very proud Russell.

Another finalist was also from Merseyside: Jacqui McGinty, 51, from Sandstones, went head to head with Russell.  She has been in her care home’s catering team for four years. Jacqui said she was delighted to have reached the finals, especially as she was competing against experienced chefs.

Competition organiser Andy Seal, from Anchor’s service delivery team, said: “We pride ourselves on the high standards of our catering service and Jacqui and Russell have shown that we have every right to be proud.

“The chefs’ dishes were all delicious and well presented, making the judges’ task very difficult. All the chefs’ work shows just how good care home catering can be when there are passionate, skilled people in the kitchen.

“And it’s a great career – many chefs come to us because of the social hours they work and the big difference they make to older people’s lives.”

Find out more about Anchor's approach to catering here.