A care home in Birkenhead has organised for Ian Snodin and some other Everton ambassadors to visit one of their residents. 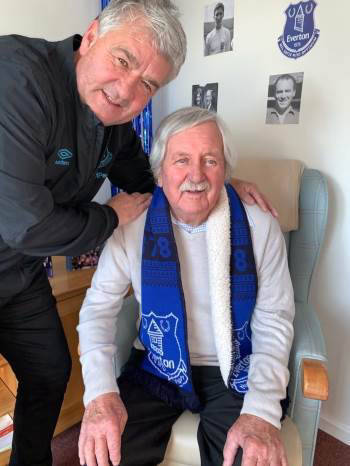 The carers at Anchor’s Heyberry House in Ashville Road had organised for 80-year-old George Williams to visit Everton’s stadium on a private tour but had to cancel due to his failing health.

In a bid to grant him his wish, Home Manager Clare Holland and Team Leader Nicci Hogg have organised for the former footballers from the club to visit him on Wednesday next week (23 October).

Clare said: “We knew that George, who has lived here since November last year, was one of the biggest Everton fans in the country so we wanted to grant his wish of visiting the stadium which he hasn’t been able to do for health reasons for many years.

“When his health deteriorated so much that he wasn’t able to visit the stadium, I thought why not get the club to visit him here at Heyberry House. I’m so pleased Ian Snodin and the other ambassadors are able to come because it means so much to George.”

Daughter Karen Carr said: “I’m very happy Heyberry House have organised for the footballers to visit my dad. It means a great deal to him because he’s been a life-long Everton supporter as have four generations of our family.

“He used to play football when he was younger and only stopped playing due to a knee injury.

“Heyberry House is such a good care home. My dad is very settled here and he loves the staff.”

Midfielder Ian Snodin moved to Goodison Park in January 1987 after turning down an offer to join Liverpool, with Everton winning the title that season. In 1989 he was called up to play for the England squad during a friendly international match against Greece.