Three Leeds care homes have launched a letter writing project to combat loneliness for those older people living alone in the community.

Residents from Halcyon Court, Headingley, Beech Hall, Armley, and Oak Tree Lodge, Gipton, have designed postcards that will be placed in community hubs across the city. 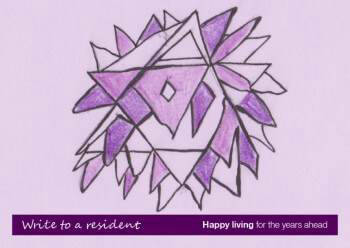 Five residents from each care home have painted their own design which have been used on the front of the postcards which include their name and care home address and some details about why they chose the design for the postcard.

David Wood, Anchor’s Community Partnership Manager, who has organised this campaign, said the aim was for people to send the postcards back to the residents so they can start writing to each other.

He said: “The postcards will be placed in Leeds Art Gallery, cafés and GP surgeries in the city. We hope that people will take the chance to start corresponding with our residents.

“We particularly hope that older people living alone will send the postcard back so that they can build up a friendship with someone of a similar age. Loneliness is a killer so we hope that these postcards will be a life-line for lonely older people.” 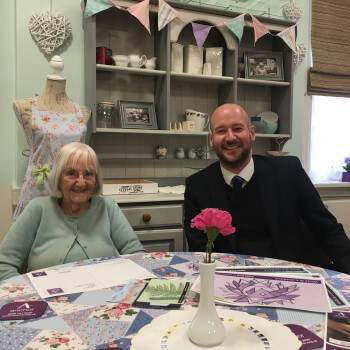 Ann Paul, 80, who has lived at Halcyon Court for almost two years, said: “I’m pleased that my design is on the front of the postcards. My family won’t believe it!

“I’m looking forward to writing to people because I enjoy writing letters. It’s a nice way of making friends.

“I used to write letters to a girl who came to stay with us and then went back to Australia where she had a sheep farm.”

Fellow resident Maureen Jones, 81, who moved in to Halcyon Court last April after living in the Woodhouse area of Leeds all her life, said this was the first time she had heard about such a writing campaign and felt proud to be part of it.

Maureen, who has two grandchildren and one great grand-daughter, said: “I’m particularly surprised to be involved as I’ve never really been that artistic but it’s been fun. I think with writing project is a good idea and I’m looking forward to writing to people across Leeds. I might even become famous!”

Anyone wanting to find out about the project can contact David Wood at Halcyon Court on 0800 0854319.