From growing up in the years after World War One with rationing still in full effect, working in a cookhouse during the Second World War, to passing down cookbooks to her children, a love of food has always been a constant in Betty’s life.

I was born in Cologne, Germany, 1923, in the city’s Military Families Hospital. My father was a member of the British Army, stationed in Cologne as a soldier in the Army of Occupation; he worked on the rations wagons, delivering food and supplies to officers across the city. 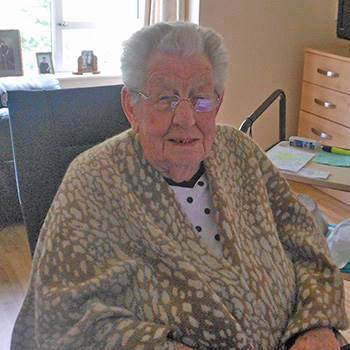 At the time, officers were billeted in Cologne’s largest homes with local families, who were given additional rations, not only as a way of saying thanks, but as extra provisions to cater for the troops. At the time, my mother was living with a wealthy German family in the city, and that’s how my parents met.

When I was two years’ old, we moved to England and the village of Black Notley – my father was from White Notley, the village next door. I never found out about why they were named!

All of my memories of my childhood are happy ones. I was an only child, but I regularly saw my many cousins who lived nearby. On weekends, I’d go into town with mother, Aunt Alice or the other ladies from the village: we would stop by the café, eating buns and drinking coffees, or visit the market in Braintree, which wasn’t very big but I used to love it.

Mother was a wonderful chef, and everything she made was delicious. Honestly, I don’t know how she dished up the food she did with the appliances we had: a coal range, a three-burner stove, an oven.

She cooked with rich foods and, often, game that we purchased from the local poacher. Our house was right next to the fields that divided the two villages; he would often swing by, wearing his signature hat, and ask mother, "What would you like, Mrs Westwood?" He kept everything he caught in his overcoat pockets: there were birds, rabbits, the whole works!

She was such a bright woman. As a supplement to her wages, she did dressmaking and dressed all the brides in the local villages. She was self-taught: to learn, she used to take suits to pieces, examining how they were made and stitched together.

Father was less of a culinary luminary and certainly less prolific, which was perhaps for the best, as his repertoire was somewhat more restricted: he was stationed in India for a while and there he learned to make curries, but that was the extent of his cooking talents. It meant that whenever mother was unwell or too poorly to cook, curry was back on the menu; it was always incredibly fiery and, growing up, I can’t say that I was a fan.

As a child I was always encouraged to help in the kitchen wherever I could. I learned my way around the appliances at a young age. It made sense for my first job to build on this, and I became assistant superintendent in the kitchen of Black Notley Sanatorium, a hospital in the village that specialised in the treatment of tuberculosis, built just before the war.

The sanatorium was a busy place: at any one time there could be more than three hundred patients. With just four of us working in the kitchen it was always an all hands on deck scenario!

Every meal was prepared with only the freshest ingredients to help the patients recover; there was plenty of milk, protein, eggs and cheese. There wasn't any choice of dishes; everything was picked by the sanatorium matron, who was almost single-handedly in charge of all aspects of the sanatorium's day-to-day life.

On the outbreak of World War Two, I was sent to work in a cookhouse; I still remember the shock of my first day. They took us into a room that contained a forequarter of beef, all still on the bone, and said to us: "Now, make three thousand sausages". That was between four of us! Of course, we did it, but it was hard work and an eye-opener. I didn’t eat sausages for quite a number of years afterwards!

I continued cooking after the war, enrolling on a two-year course at technical college in Chelmsford: we would bring in our own ingredients and then cook in the college cookery room. It proved to be incredibly handy: you gained a real sense of what four ounces of sugar looks like, what half a pound of flour feels like, and so on, until I could scoop without needing to weigh. It's surprising, how this kind of stuff stays in your mind.

I have always loved to cook and, these days, get a good evening’s entertainment out of reading a cookbook; I used to have such a lovely collection of them. My three boys – Edwin, Jim and Peter, the oldest and now a pensioner – are avid chefs, too; when we sold the house, they shared the books amongst themselves. The boys enjoy cooking and showing off what they've made to their wives, which I really think is great.

I’m sure that teatimes have changed from when I was a child: back then, we sat at the table to eat and the television barely existed! Nowadays, I’m as partial as the next person to eating on a tray in front of the telly, though it is still nice to eat our meals together.

I like quite a range of meals these days, I have a bit of a sweet tooth and must say that I’ve always loved chocolate – it may not be good for my waistline, but it’s lovely.

The other week we had some sausages that were really, really tasty. It reminded me a little of the past and thinking back I made sure to say to the girl who was taking away the crocks, “Nice meal – please tell the kitchen”. And I believe she did.