With a family spread across continents, she finds that food is an important aspect in getting people together and keeping in touch.

I was born in Manchester, but I grew up mostly in London, and much of my education was in Bournemouth. I was an only child of only children; we weren’t a big family at all. My dad was a musician, so he was often away travelling with his orchestra. My mother stayed at home, which was much more common when I was growing up. I remember she was a good cook - I never did any cooking when I was at home. 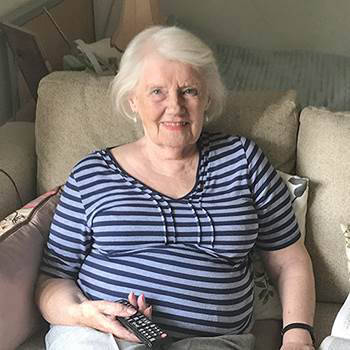 When I was 18 I went into the theatre, which is when I flew the nest - I wasn’t allowed to leave home before then! Through work I got to move around a lot. My favourite place I’ve lived in is New York; I was only there for about a year but I loved it. I had such a lovely time there, I never really missed home.

I didn’t actually do any cooking until after I was married, and found that due to lack of practice, my husband was a much better cook than me! But once we were married, my husband felt that I should be doing the cooking, and so I had to teach myself from scratch, using recipe books mostly; that’s just the way it was then.

We had three children – boy, girl, boy. It just happened! When they were growing up, all my children liked cooking and had more chance to get involved with food than I did as a child. They would mostly get on with it on their own; like me, they’d just get out recipe books and crack on with it. They were always good cooks, all three of them, and it was nice being able to come in find that there was a meal ready at tea time – especially if they’d made cakes! I’m very pleased they all have cooking as a skill.

We’d always eat round the table as a family, even more so with the Sunday Lunch. If my husband was working on a Sunday, which he often was, we’d have lunch a little later so he’d be able to join in on the conversation. I always thought it was important to eat together with the family – still do.

My three children all now have their own, so we’re a four-generation family. The littlest one, my great-granddaughter, is just about to start school – well, I say little, she’s five now so not so little anymore! With my eldest son now living over in the United States, and my daughter down in Cornwall, we don’t all get together as much as we used to, but when we do food is still important; I find it helps you keep in touch with everybody.

I’d say my favourite meal now would have to be anything to do with prawns – I love prawns. If anything I think I eat too many of them! I like any fish really, and luckily we have quite a lot of fish on the menu here. I’ve lived at Dawson Lodge for about a year now, and there’s always a good choice on the menu - I’m enjoying it.