Naughty behaviour is not usually rewarded but disobedient dogs have been vying for a prize during a ‘Crufts’ competition at Townend Close care home in Keighley.

Staff at Anchor’s Townend Close care home in Victoria Road, organised the dog talent show as part of its programme of meaningful activities for their older residents.

Pets belonging to the families of residents as well as staff will be taking part in the competition on Thursday (7 March) which was watched by those living at the care home. 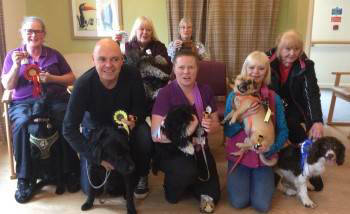 Judges Bill Mason, Bessie Watkins, Brenda Redman and Noel Wilkins, who are all residents at the care home, had to decide which dog is the naughtiest, the most obedient, the cutest, the one with the best personality and the one who can best perform tricks.

The winners (photographed) are as follows:

Leroy the Labrador won Most Obedient award while Charlie the Cavalier King Charles Spaniel impressed the judge in the Best Tricks category. Crumble the pug proved he had the best personality while Molly the Shih-Tzu won the Cutest Dog trophy.

All those present agreed that Rosie the Cockapoo deserved the Naughtiest award with the Champion award going to Nelson (Goldador). Freyer the Springer Spaniel won the Reserve Champion – Freya award.

Townend Close Manager Sharon Mackie said the judges had been looking forward to the event which has already attracted many entries. 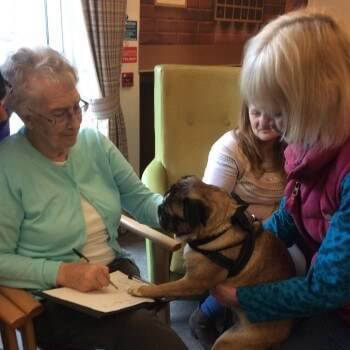 She said: “This was a fun event for everyone involved, especially those who used to have their own dog.

“We know that being able to pamper and stroke dogs really helps relieve stress for older residents.

“Anchor has a policy where people can move into the care home with their pet so we welcome many four legged friends at Townend Close. You can see how it really makes their day when residents interact with pets so we decided to organise our own Crufts events.”

Many of the residents had been looking forward to the event including judge Bill, 92, who used to own two Labradors as well as a cat.

Bill, who has been living at Anchor’s Townend Close for four months, said: “I think the Crufts event is a good idea because dogs are my favourite animal. It has been great fun judging the competition.

“I loved having my own dogs as they provided great companionship as well as keeping me fit on the many walks we used to do together.

“My son Andrew regularly visits Townend Close with his 14-month-old dog Milly, and I love making a fuss of her.”