Residents have helped staff design the corridors in which they live in a care home in Otley. 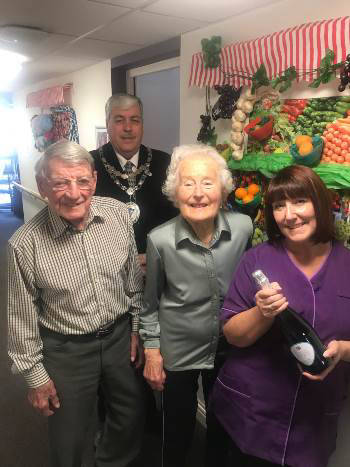 After weeks of painting the corridors and installing 3D artwork with the help of professional artists and volunteers from Otley Courthouse, the final touches were made to the three designs at Anchor’s Teal Beck House in Crow Lane ahead of a panel of judges deciding which was the best design on Saturday (3 August).

Town Mayor Peter Jackson and his deputy Sylvia Thomson, the President of Otley Chamber of Trade Keeley Kerr joined three residents to choose the winning design in the competition, the theme of which was life in the town. The three designs were: Chevin, the Market Place and the River Wharfe.

The judges said the standards of the designs were impressive but decided the winning design was by Team Leader Jayne Christie, Rachel Gibson and their team who created the Market Place.

Resident judge Margaret Kendall (pictured), 89, who has lived at Tealbeck House for 18 months, said: “The corridors all have excellent displays but I liked the Market Place because it is very colourful, and it brought back memories of when I shopped in the market for 40 years.”

Mr Jackson said: “I thoroughly enjoyed judging the designs. So much thought has gone into them. They are all appropriate for Otley. Both residents and visitors can relate to them.

“I liked the detail and the thought behind the winning design, especially the fruit stall.

“I had a wonderful time. I’ve enjoyed meeting the residents and staff. The work the team at Teal Beck House provide is second to none. The home is full of happy residents. A good day all round.”

Winner Jayne said she and her team were surprised to have won but were very pleased.

She said: “We wanted the design to be interactive so residents can touch, feel and smell it as you do in a market place. I wanted to make it as 3D as possible so that it looked life-like.

“We asked the residents living in the corridor for their opinion on what flowers and fruit to include as this is their home. I’m pleased how it looks.”

Photocaption details: Town Mayor Peter Jackson with (from left to right) residents and judges Ron Hannan and Margaret Kendall and winning designer Jayne Christie pictured with one of the designs in the winning corridor called Market Place.