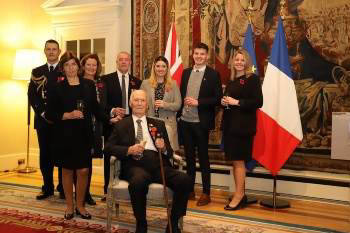 Willow Gardens resident has been awarded France’s highest military award in recognition of his service during the Second World War.

James Collie, a resident of Willow Gardens care home, was presented the Légion d’honneur on Thursday 11 November by the Ambassador of France to the UK Catherine Colonna. The presentation took place at the French Residence in London in honour of Armistice Day. James was awarded the order for his service as a Lancaster bomber pilot during the war, particularly for his work in the D-Day landings.

During his military career, James was deployed with his squadron several times across the English Channel, flying missions into France and along the Dover Strait. Their aim was to draw attention away from the D-Day landings in Normandy which helped to liberate France and laid the foundations for the Allied victory on the Western Front.

James joins several thousand Allied service personnel who also have received the award. Since 2014, the then president of France, François Hollande, began to award the Légion d’honneur to British veterans who helped liberate France during the war. 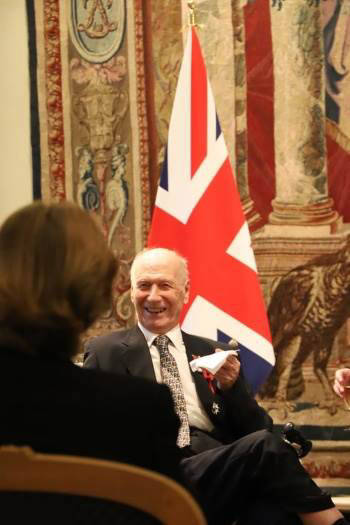 At a time when Europe was experiencing its darkest hours, my country was fortunate to be able to count on the support of its closest partner, the UK, and of the brave British people who fought for our common values: freedom, democracy and peace. James Collie was among them as a Lancaster bomber pilot.

James was delighted with his award, saying:

It’s a very great honour for me to receive the Légion d’honneur and I feel privileged to join the ranks of its distinguished recipients.

I’m proud to have served my country and the country of France, and glad to have done my part. I hope people can learn from what we went through and make the world a better place.

We’re absolutely delighted for James! It’s so wonderful to see him recognised for his bravery and everything he did.

I’m sure I say on behalf of my whole team and all the residents at Willow Gardens: congratulations James and we are honoured to have you as part of our family here.

To find out more about Willow Gardens, please visit anchor.org.uk/our-properties/willow-gardens-yateley.