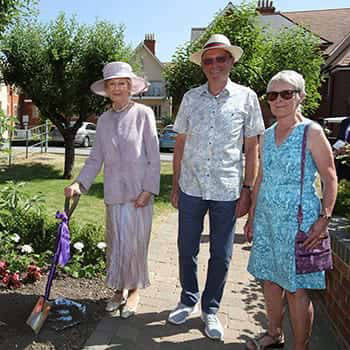 The special visit was to commemorate the 50th anniversary of Anchor – the UK’s largest not-for-profit provider of housing and care for the over 55s.

Howard Nankivell, Housing Operations Director at Anchor, led a tour of the development, starting with a visit to The Mount, the meticulously restored former Victorian hospital which now houses a state-of-the-art Wellness Centre, swimming pool and gym. Here, Princess Alexandra met senior wellness manager Brett Jenkins, who was only last week named as a finalist at the UK Active Awards for his outstanding work in changing the lives of older people.

Following this, Her Royal Highness helped to plant a new apple tree at the development’s beautiful sensory garden, before visiting the Redwood Bistro - Bishopstoke Park’s award-winning restaurant. Here, she was presented with a bouquet of flowers by Olivia, nine-year-old great granddaughter of two of Bishopstoke Park’s long-standing residents, Vincent and Margorie Gregory. 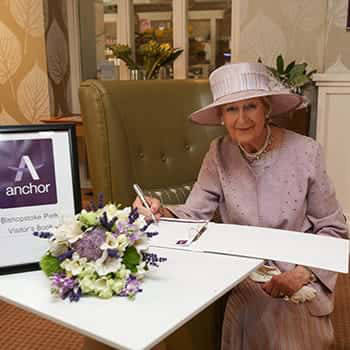 Jane Ashcroft CBE, Chief Executive of Anchor, comments: “Princess Alexandra’s visit to Bishopstoke Park marks an important milestone for us as we celebrate 50 years of providing services to older people. We were delighted to host Her Royal Highness again and it was particularly nice to see so many of our residents make a special effort to welcome her both in our sensory garden and in our award-winning restaurant.”

Bishopstoke Park provides 164 independent living retirement apartments set in beautiful woodland with state-of-the art facilities, giving older people the opportunity to live independently and receive support from highly trained professionals should they need it. There is also a 48 room integrated care home on site called Orchard Gardens. The village is undergoing further development which will see the addition of 73 further one and two bedroom apartments.