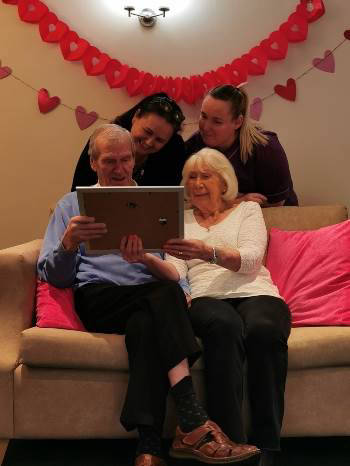 Bill and Mary Thomspon, who have been married for 62 years, said the secret to their marriage was to always listen to each other and never go to sleep without making up after an argument.

Great grandfather Bill, 83, who has lived at Anchor’s Widnes Hall care home in Coronation Drive for two years, said: “Our most romantic day was our wedding day and since then every day has been special.

“Our marriage has lasted because we love one another and have lots of respect for each other.
“My advice to young couples would be to never go to bed for the night without making up if you’ve had an argument and you must expect a lot of give and take in a relationship. But above all, love each other unconditionally.

“Valentine’s Day is a chance to show you care for someone you love and we are still in love after 62 years of marriage.”

The couple bought a fish and chip shop when they were 27 years old which they owned for 13 years.
Bill and Mary are joining their friends at Widnes Hall for two days of Valentine-themed events: the care home held a special afternoon tea for all the home’s married couples on Thursday (6 February) in a room decorated with their wedding photos, and then all the residents will be invited to a buffet meal on Friday (14 February) during which they will be entertained by the Knight Choir.

Widnes Hall Manager Marie Parkinson said the Valentine’s party was part of a packed programme of activities at the care home.

She said: “This is such an exciting event. There will be lots of fun, colour and wonderful food all made from fresh seasonal ingredients. Older people have a life time of experience when it comes to love so it’s great Bill and Mary can offer younger couples advice.

“The party is part of Widnes Hall’s ongoing programme of interesting activities which aim to stimulate the residents physically and mentally.
“Such events are also a great occasion for residents to socialise with friends and their families.”