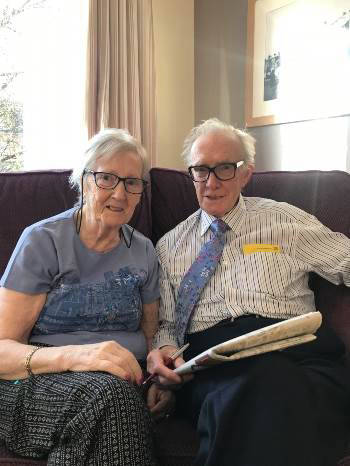 Peter and Glen Jackson, who have been married for 58 years, said the secret to their marriage was to always be patient with each other.

Grandmother Glen, 81, who has lived at Anchor’s Buckingham Lodge care home in Culpepper Close since July last year, said: “Peter was in the RAF so when I saw him in his uniform it was love at first sight.
“Our most romantic day was our wedding day and since then every day has been special.

“For my big day, I wore a white wedding dress, with half a veil and white shoes. I carried a pink rose bud bouquet which I still have. My cousin and sister were my bridesmaids.

“Peter was in uniform and his colleagues also in uniform saluted him as we left St Mary’s Church in Aylesbury.”
After Glen first introduced Peter to her family, her mum said that Peter was the one for Glen and gave the young couple her blessing but they still had to ask the RAF for permission to marry each other.
Glen added: “When Peter proposed, I jokingly said that it was about time! I made sure that he went down on one knee to propose!

“Valentine’s Day is a chance to show you care for someone you love and we are still in love after 58 years of marriage.”

The couple have five children – Susan, Robert, Rosemary, Christine and Doreen, two of whom are adopted.
Glen said that patience was the key to any successful marriage while Peter, 79, said that it was important “not to give up at the first hiccup in a relationship”.

Peter and Glen will be joining their friends at Buckingham Lodge for Valentine-themed activities on Friday (14 February), including love poems being read out at the home’s poetry club and members of the catering club making red velvet cupcakes.

Buckingham Lodge Manager Craig Summers said the Valentine’s party was part of a packed programme of activities at the care home.

He said: “Older people have a life time of experience when it comes to love so it’s great Peter and Glen can offer younger couples advice.

“The Valentine’s Day events are part of Buckingham Lodge ongoing programme of interesting activities which aim to stimulate the residents physically and mentally.
“Such events are also a great occasion for residents to socialise with friends and their families.”