Two residents have re-enacted scenes from the iconic film Brief Encounter in Anchor’s Kimberley Court care home which is fitted out with a mock train station to mark the 80th anniversary of when the film was set. 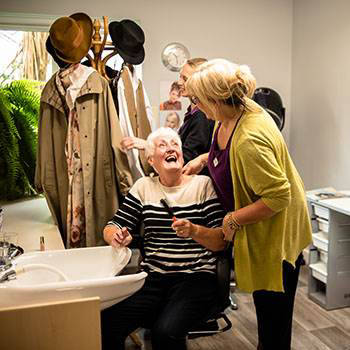 The black and white classic, directed by David Lean and featuring Trevor Howard and Celia Johnson, was set in late 1938 and was a big hit in cinemas when it was released in 1945.

Ron Mula, who lives at Kimberley Court in Newquay, and his wife, Renee, re-enacted the scenes as part of the home’s activities centred around it’s mock railway station.

Staff at the home in Kimberley Close spent months turning rooms at the home into Prosecco Place – a high street with a bank, hairdressers, traditional sweet shop with jars of sweets and the train station with a huge clock and a carriage. Residents can visit the street’s community centre which is decorated in photos from old Hollywood stars and where they can play snooker or darts or have a go on a slot machine.

The corridor linking all the shops has been decorated in brick wallpaper to add to the effect of walking down a local high street which even has its own telephone box with an old-fashioned phone.

There is also an allotment where residents grow vegetables which they can cook with the home’s chef in a 1950s-style kitchen. 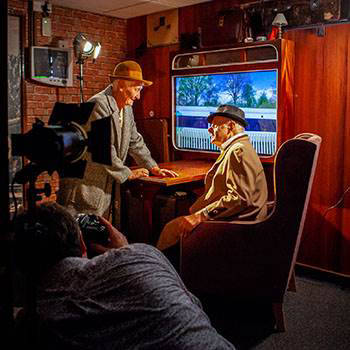 Funding for the project came from Anchor’s legacy fund of bequests from residents who lived in the charity’s care homes or retirement housing properties in England as well as donations from staff, families and the local community.

Manager Carrie Newth said that the project had seen all the local community working together to provide a truly stimulating environment for residents with dementia.

She said: “All our activities are meaningful, and the train station in Prosecco Place will enable the staff to engage on another level with residents who will recognise the street as it’s similar to the ones they used to shop in.

“The street will be used by small groups or for one-to-one sessions which can help residents who live with dementia.

“Prosecco Place is the perfect location for reminiscence sessions but residents can also do arts and crafts, painting, gardening, cooking and baking and then go shopping, or have their hair or nails done at the hairdressers – just like they would have done when they were younger.”