Liza Gjoni, Team Leader at Wyken Court Extra Care scheme in Coventry, has triumphed at the regional finals of the Great British Care Awards 2020, which recognise excellence across the care sector. The awards were rescheduled to Summer 2021 due to the ongoing COVID-19 pandemic.

Liza received The Frontline Leaders Award in West Midlands at a regional final ceremony hosted at The ICC in Birmingham. 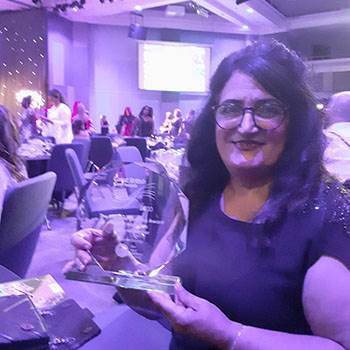 Judges concluded that Liza demonstrated clear passion and pride in her work. She was also praised for constantly leading by example and for enriching the lives of residents and colleagues.

Having won her regional award, Liza will now go on to represent the whole of West Midlands in The Frontline Leaders category in the national finals taking place in at The ICC in Birmingham on Saturday 25 September.

Kelly Adams, Manager of Anchor’s Wyken Court Extra Care scheme said: “This is a fantastic personal achievement and a reflection of the quality and dedication demonstrated by Liza.
“She is a delight to work with and a credit to the whole team. I’m sure all her colleagues and our residents would agree!”
Liza was delighted with her win, saying: “I just can’t believe it! Honestly it was such an honour just to be nominated but to win The Frontline Leaders Award in West Midlands is a dream come true!

“I’m looking forward to going to the final in Birmingham. I hope I can do everyone at Anchor’s Wyken Court Extra Care scheme and the whole region proud!”