A Tadcaster retiree has received an award for being a “Digital Dynamo” and helping his neighbours use technology to stay in touch with loved ones. 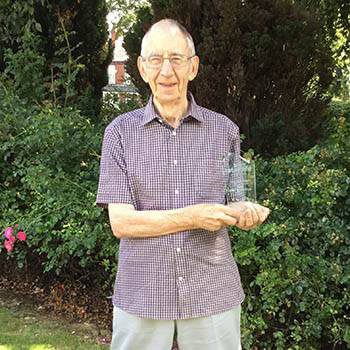 The Award is presented to a resident who has gone the extra mile and helped others to do remarkable things with modern technology, with Roy winning the award for his willingness to help his neighbours embrace technology.

Roy’s support with technology proved instrumental during the pandemic at a time when many people were unable to see their families and friends. He took it upon himself to set up regular personalised bulletins for his neighbours to send to their families via email and social media along with photographs he took, to show them how they were getting on.

In addition to supporting his neighbours, Roy also provided invaluable to support to staff who manage the location and support residents living at Popple Well Springs. Helping them set up new technological systems around the communal spaces, including music speakers in the community restaurant, as well as using his photographic skills and digital knowhow to help the manager keep residents informed with an electronic billboard.

In recognition of being crowned this year’s Loving Later Life’s Digital Dynamo, Roy received a trophy and a heartfelt thank you from everyone at Anchor Hanover.

I nominated Roy for the award because he has quite frankly been a God-send! Since moving in to Popple Well Springs in 2015 he has just done so much to help everyone.

To me, he is a constant source of positivity in the local community and goes above and beyond to support other people, including staff and his neighbours. He does it because he enjoys it, he loves the new digital era and is always keen to learn new things and share his knowledge with everyone! During lockdown he’s just been great, not only just being a helpful face but also putting all his digital skills to great use.

Roy was deeply touched by his win, saying:

This is absolutely delightful! I’m deeply honoured just to have been nominated!

I’ve always been interested in new technology and even before the whole coronavirus situation I’d been training myself in the new digital devices. Being able to help my neighbours and everyone at Popple Well Springs with some of the tips and tricks I’ve learned over the years has just been the icing on the cake!