Sculptor unveils work so fellow tenants can enjoy it

A sculptor has unveiled one of his creations in the garden of his retirement housing property in Milton Keynes. 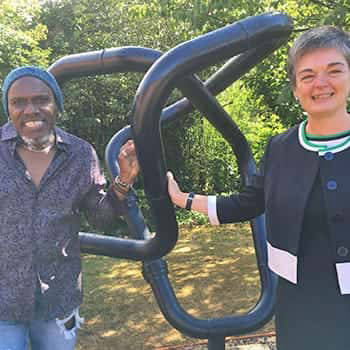 Artist Roland Lawar has installed Blue Loop in the grounds of Fulwell Court in St Leger Drive, where he has lived for nine years.

Jane Ashcroft CBE, the Chief Executive of Anchor, which runs the retirement property, will be the guest of honour who will unveil the sculpture watched by Mr Lawar and his fellow tenants.

Mr Lawar created Blue Loop, which represents the endless circle of life, in Houston, USA, in 2003.
He said he wanted to unveil the sculpture as part of the 50th anniversary of Anchor, which is England largest not-for-profit provider of care and housing for older people.

Mr Lawar, who is a self-taught sculptor and has been developing his skills since 1983, said: “Blue Loop is an abstract modern contemporary sculpture which was constructed from scrap tubular steel welded together.
“My motivation for my sculptures is what I am inspired by, the beauty of my surroundings and the peaceful feeling from within.

“Blue Loop has enjoyed some exposures in public spaces. It has been placed in other gardens and has always blended well with a tranquil effect in its environment.

“The response from the tenants at Fulwell Court has been overwhelming. They were so keen that they were the ones who initiated the unveiling ceremony.”