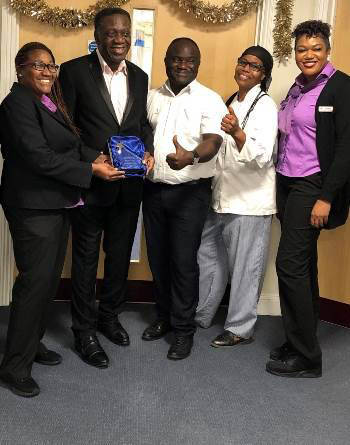 A care home in Peckham will be organising a party to mark the contribution the black community has made to British society.

Staff from Anchor’s Waterside care home in Sumner Road have organised the event as part of Black History Month.

One of the attendees is former teacher Isaac Kwame Adu, 74, who has lived at the care home for three years. Isaac started visiting the UK from Ghana when he was nine but didn’t move permanently to the country until 1985, aged 35. Having met his future wife, Christiana, in England, they were married and had four children together.

He might have emigrated to the UK but he still maintained strong links with his homeland and the Ghanaian community in Britain. He was elected the General President of the Ghana Union and was Secretary of the Ghanaian Presbyterian Church in London.

In fact, the Ghanaian Presbyterian Church presented him with a trophy in December last year to mark his contribution to the Ghanaian community in this country.

He was always keen to share his knowledge with the younger generation so it was inevitable that he would choose teaching as a career.

Having studied in Britain, he became an English and history teacher, educating young children but he also supported children with special needs.

We have many residents living in Anchor’s care homes and staff members who came for a new life in Britain and they have made such a great contribution to society that we wanted to celebrate their achievements.