Kimberley Court care home in Newquay hosted a fun-filled day of activities to mark the end of our national cycling challenge – Get Set, Cycle. 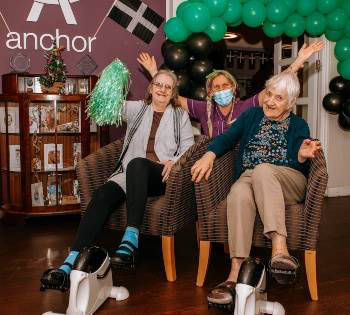 The challenge was launched to encourage positive fitness habits through accessible physical activity. Resident and colleagues in our care homes across the country cycled the distance between care home locations and crossed the finish line on Monday 29 November at Kimberley Court care home on Kimberley Court.

Special equipment was provided including floor pedals and Memoride – a virtual cycling platform for older people which uses Google Maps to project images of towns or paths onto a screen – so residents and colleagues of all abilities could take part in the Get Set, Cycle challenge. Crushing its initial target of cycling the circumference of the Earth (24,901 miles) the organisation cycled a whopping 38,844 miles since the initiative began in June. To celebrate this accomplishment and mark the end of the initiative, the care team at Kimberley Court put together a full day of cycling-themed activities for residents.

To kick off the festivities, residents were treated to a cycling talk and bike display led by Owen Rawlings, Chef Manager of Kimberley Court. Riding and racing since he was a young boy, Owen has had several BMX and mountain bikes over the years and was thrilled to share his knowledge with residents. Nowadays, Owen enjoys riding trails with his children and watching professional bike races such as the Tour de France and Tour of Britain. During the session, Owen helped resident Malcolm Perry ride around on his BMX. Malcolm said:

I’ve loved the Get Set, Cycle challenge and helping the organisation clock up miles. Getting to ride a BMX was definitely a highlight, it’s always fun to try something new no matter what your age!

In the afternoon, residents put on their dancing shoes as they enjoyed entertainment by local performer Dwayne AJ before sitting down for afternoon tea. The final part of the celebration took place in the care home’s pub where residents socialised as they sipped on custom cycling-themed cocktails such as The Rusty Chain, Saddle Sore and Over the Bars.

We’ve really enjoyed taking part in the Get Set, Cycle challenge and clocking up so many miles as an organisation is absolutely amazing! Cycling is a great opportunity to exercise our bodies and minds and has helped our residents keep up good fitness habits while also having fun.

Encouraging physical and mental wellbeing is important to all of us across Anchor so it’s been great to see residents and colleagues get involved in the challenge.