Fitness fan Brett Jenkins makes it to the finals

Brett Jenkins has been named as a finalist in the Physical Activity Champion catergory of the UK Active Awards, for his outstanding work in changing the lives of older people.

Brett, who works as a Senior Wellness Manager across two of Anchor’s flagship Retirement Villages; Hampshire Lakes in Yateley and Bishopstoke Park in Eastleigh, was nominated by his General Manager Rhona Smith.

The UK Active Awards recognise and celebrate excellence and innovation across health, wellbeing and fitness in the UK. The winners are decided by the general public and voting is now open. 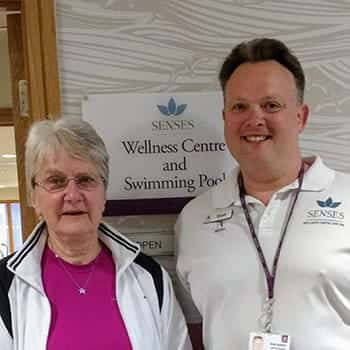 Brett has worked in the health and fitness industry for over 25 years. Starting off his career as fitness instructor in his native South Africa, he soon worked his way up to General Manager in both the private and public sectors. In 2016 his fitness passion took a different turn when he started training older adults and transforming them into Active Aging Adults. He has built up the Wellness Centre within Anchor Trust’s Hampshire Lakes Retirement Village in Yateley and has made a key connection between the inner village and outside communities.

Brett who is thrilled to be shortlisted said: “I feel humbled to be shortlisted for such a prestigious award and cannot thank my manager Rhona Smith enough for her continuous support and encouragement towards my true passion of making older adults into Active Aging Adults.”

Jo Taylor who has lived at Hampshire Lakes for over two years said: “Since moving to Hampshire Lakes I have been inspired to take regular exercise in our Wellness centre.

Brett Jenkins has created a range of classes and activities which are incredibly enjoyable as well as 'good for us'. The classes have been designed so that there is something for differing abilities and differing senior age groups. He has also encouraged non-residents to join in which has brought another dimension to them. We are now a real part of the wider community and not just another retirement complex! Fun physical exercise with new friends - what more could anyone want?”

The voting is now open and will be voted for by the general public. The results will be announced at the UK Active Awards on 21st June.