On Friday 1 November, Anchor Hanover, the UK’s largest not-for-profit provider of housing and care for over-55s, and Hill, one of the UK’s top housebuilders, hosted a ground breaking event to celebrate the start of construction at The Landings, a much anticipated new retirement village in Kings Hill, Kent. 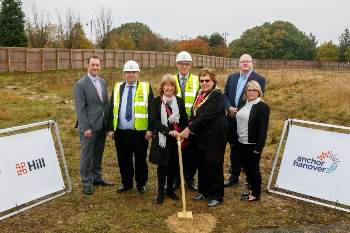 The special guest of honour, Mrs Budd, a local resident who with her husband the late Mr Budd had been campaigning for many years to get retirement housing provided at Kings Hill, attended the ceremony with her family and friends. With a golden shovel, Mrs Budd dug the first hole – paving the way for building contractor Hill to take forward the project.

The Landings will offer assisted living for over-55s, with 75 one and two bedroom apartments among landscaped grounds, with amenities including a salon, residents lounge, bistro, treatment room and an on-site care team. The development forms a key part of the wider 650-acre mixed-use Kings Hill masterplan, being led by Liberty Property Trust UK.

During World War I, Kings Hill was used as an emergency landing ground and later in 1941, it was home to RAF West Malling as a fighter command sector station. The base was active in missions over France and Germany and was used to intercept flying bombs launched towards London. In the early 1960s, the land was used as Britain’s premier night fighter station and later become home to several squadrons of the US Navy. In 1971, Kent County Council bought the land from the Ministry of Defence and two decades later, developers were asked to pitch their ideas for the site, with Liberty Property Trust UK taking the honours.

Phill Hulme, Sales Director at Anchor Hanover, said: “We are delighted to celebrate the start of construction at this much needed later living development Kings Hill, with a local resident who was instrumental in her campaigning to facilitate this. Through the delivery of The Landings we are aiming to address the shortage of retirement housing in the area and anticipate considerable interest from those who are looking to downsize and live active and independent lives. The Landings will be an excellent addition to Anchor Hanover’s exciting and fast-growing portfolio of high quality later living home across the UK.”

First completions are expected in late 2021.