Anchor is supporting the National Housing Federation's Starts at Home campaign to raise awareness of the importance of supported housing. 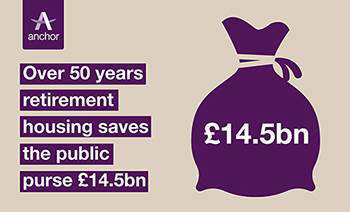 There are now more people aged over 65 in Britain than those aged 16 and under, and as older people are living longer thanks to better health standards, the lack of suitable retirement housing is affecting both older and younger generations.

Anchor’s retirement housing managers are raising awareness of the importance of supported housing as part of the National Federation’s Starts at Home actions day on 1 September.

The campaign, now in its second year; celebrates how supported housing helps hundreds of thousands of vulnerable people regain their independence and confidence. Anchor and other housing associations are also campaigning to persuade the Government to commit to ensuring every person who needs extra support have a home that meets their needs.