On Saturday 19 March I was joined by fellow cyclists Steve Brock and Andy Fox, who are friends of Sundell Court’s manager Sue Mulcaster for the ride from Stockon on Tees to Ripon. It was great fun cycling with them and they pushed me to my limits, arriving in Ripon three hours early!! 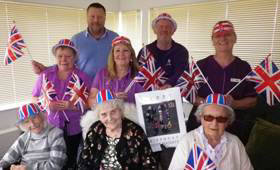 Borrage House, the first of 16 Anchor locations on this week’s schedule, was where I was followed for the day by Stray FM. You can hear my interview along with comments from the care home’s residents and staff here.

Stray FM followed me to The Meads where I was welcomed by Ripon’s Mayor and the Ripon Hornblower. The first time I’ve ever been welcomed to a place by a gentleman dressed in regalia blowing on a large cow horn! Resident Betty Walters presented me with £190 for Grandparents Plus.

Sunday was my first day off since starting my tour and I spent the day looking round Ripon. To my shock I saw a donkey roaming the main square but soon realised it was Palm Sunday so watched the procession of people make their way to the church.

Guardian Court in York was where I received an amazing welcome from Frank Cartin, Vera Turner and their fellow tenants. They had made their own banner welcoming me to the city.

I was in Selby the following day where I visited Firth House where I had my photo taken with residents and staff by The Selby Times. 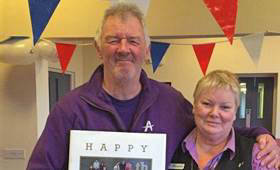 I stayed overnight at Plymble retirement property where I had a lovely welcome and met manager Margaret Purden who is a bit of a fundraiser herself – she shaved off her hair several years ago in aid of charity.

Wednesday was the busiest day this week, visiting three retirement properties and one care home.

My first port of call was St Clements Court in Pontefract where they told me they had raised £120 but the biggest amount raised on my tour at that time was my final visit of the day – Chapel Green in Leeds where manager Carol Pollard and her tenants presented me with £213.

In between these two places, I visited Halcyon Court in Leeds where I had a lovely reception. I slept well that night at Montague and Lionel Court after such a busy day.

Thursday was amazing. The first place on my schedule of Bradford locations was Ashcroft care home where after a great welcome I cycled with Antony Haig to Anchor’s head office where I got the largest welcome so far – from about 100 people.

I then cycled up several hills to Springfield care home where I met a grandfather who was bringing up his grandchildren and being supported by Grandparents Plus. It was a privilege to talk to him and spurred me on to raise even more money for this worthwhile cause. 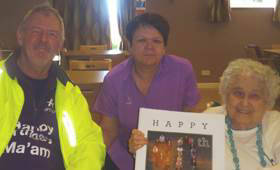 I stopped the night on Thursday at Bretton Court where I had the biggest surprise of the week: the tenants, on behalf of Bretton Court and two other schemes, presented me with £668 for Grandparents Plus. I’ve been really taken aback by people’s generosity this week.

Good Friday saw me visit Sandholme Fold care home in Bradford where they raised £50 for Grandparents Plus and then on to Trinity Fold and Browhead Court, where I judged the Easter egg decoration competition which raised £125.