I must start this week’s blog with the fantastic news that we have raised £2,100 for Grandparents Plus in the first two weeks, and we raised more this week, too. I’m so pleased, especially when I have heard first hand from the many grandparents on my tour about how the charity has helped them. I hope we can raise a lot more. 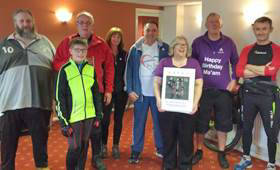 Many people had a four-day break over Easter but it was business as usual for me. On the morning of Saturday 26 March, I set out from Browhead Court in Burnley, where they raised £125, to go to Holly Court in Blackburn where I had a lovely welcome.

Saturday was a great day despite the rain and wind. Firstly because I was joined by the oldest and youngest cyclists so far, riding from Burnley to Pikestone Court in Chorley: Bryan Fox, 70, and Jared Harrison, 12, were accompanied by Anchor’s District Manager Denise Harrison, her husband, Andy, and Scheme Manager Andrew McCracken. We took the same roads as part of the big cycling race of the weekend, the Chorley Grand Prix.

But the second reason was that my wife, Jacquie, had come up to spend a few days with me, following me from one Anchor location to another. It was lovely seeing her. It’s only been two weeks but it seems much longer when you’ve visited 26 Anchor locations in a fortnight and cycled more than 350 miles.

On my day off, Jacquie and I went for Sunday lunch with our friends in Manchester. Thankfully, I wasn’t cycling this day which was when Storm Katie hit Britain in the early hours of Monday morning.

I had to contend with lots of rain and wind on Monday but thankfully I didn’t come across any trees blown down by the storm. 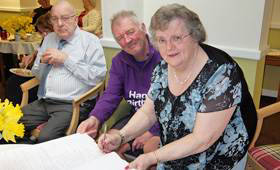 It was good to reach St Clements Court in Wigan and then St Augustine’s Court in Bolton where Manager Jacquie Wood’s daughter sang for us. Brilliant!

I was glad to get into bed after such a long day cycling.

Wherever I travel on this tour, I meet such wonderful warm people which makes up for the cold weather. It was four degrees with snow on the ground when I left Bolton. But I still wore my shorts! Well, it’s only a bit of snow!

I had a right royal welcome when I reached Bridgewood Lodge on Monday. 91-year-old tenant Margaret Stott had been elected Queen for the Day and was dressed in her regalia.

Even some of the tenants had dressed up as courtiers. Amazing! It was here that two grandparents gave a moving account of how Grandparents Plus had supported them when their daughter had died and they started looking after their grandchildren. The tenants raised £200!

I had another surprise when I arrived at Anchor Court in Manchester. Pupils from Cheetham Academy School sang “Congratulations” as I arrived. What a great welcome!

Scheme Manager Jimmy Walker, from St Pauls Court in Salford, was also there to welcome me, and we cycled the last leg of my journey that day to Ranulph Court where the tenants, Jacquie and I were entertained by two singers. The tenants had raised £450 over several weeks of fundraising.

I spent a lot of time on the road on Wednesday, cycling from Salford to Anchor Court in Warrington to Liverpool. 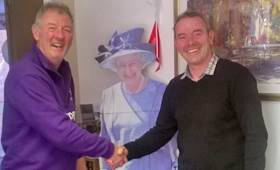 No sooner had I arrived at Molyneux Court on Wednesday, I was being interviewed on BBC Radio Merseyside and then Radio Chester Dee. One of the guests at the party, which raised £120, was Brookside actor Simon O’Brien, who played Damon Grant in the soap opera.

I travelled across the Mersey River on the famed ferry for the first time in my life. Such great views of the city. I then cycled to Heyberry House in Birkenhead before going to Summerfield House.The customers and staff made me feel very welcome. I also met Chris Matheson MP – the first MP on my tour.

Having left Ellison Court early on Friday, I arrived at Bembridge Court for a great reception before I was on the road again to Chesterton Lodge care home, which Anchor has recently acquired, where I met Gladys Warrilow, 96, who is the eldest resident there.

My final stop of the week was Beaumaris Court in Newcastle-under-Lyme where I had a lovely welcome.

Terry Keen, 69, lives at Anchor's Willow Glade retirement housing scheme, and this spring is cycling 1,400-miles across England with a 90th birthday card for the Queen