I can’t believe that a week today I will have reached my final destination, The Clies in Cornwall, after more than 1,500 miles on the road.

And I’ve covered many of those miles this week travelling from Worthing to Swindon via several towns – 144 miles to be precise! 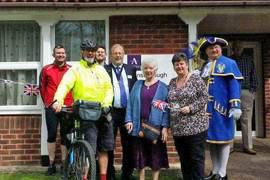 Jacquie had joined me in Eastbourne on Friday 22 April which is where we used to live and literally bumped into our old next door neighbour so had a drink with her in the evening.

I had a great time cycling with my two sons, Andrew and Mike, the following day, travelling across the south downs from Eastbourne to Evelyn Glennie Court in Brighton and then to Gainsborough Lodge in Worthing which was tiring due to the hilly terrain.

But the views were breath-taking: we cycled through the spectacular scenery over Beachy Head, and then down into Cuckmere, just beautiful, especially as the fields in this area were full of sheep with their young lambs.

It was so touching that both locations in Brighton and Worthing welcomed the three of us and Jacquie like old friends.

As well as talking to the residents at Gainsborough Lodge, it was good to meet Worthing’s Town Crier and Mayor.

Resident Betty Richardson had made so many red, white or blue cupcakes which had been put on in the shape of a Union Jack – such talent!

It was then on to August Court where I met Chichester’s Mayor and Town Crier. I so enjoyed lunch there - a delicious pie, vegetables and mash - which provided me with the energy to continue cycling to Havant where I stayed overnight. 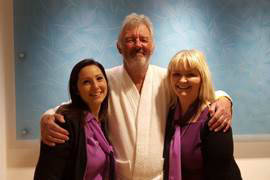 I had a lovely treat waiting for me at Mayflower Court in Southampton on Tuesday.

After cycling 22 miles in the freezing cold and snow, which started to fall from the skies a few minutes before I got to this beautiful care home, I was treated to a massage session. It was wonderful!

As with all the other places I have visited, the staff and residents were so welcoming.

Wednesday saw me cycle 42 miles – one of the longest stretches in a day on this tour so far - from Southampton to Newbury via Carter’s Meadow in Andover.

So I could only stop for a short while at Carter’s Meadow but what a wonderful welcome. And the residents there raised £305 which is one of the largest amounts one location has raised for Grandparents Plus on my tour so far. I was truly overwhelmed by their generosity.

My next stop was Lambourn Court in Newbury where I felt truly honoured to meet Mr Charlie Smith, who is 93, and was presented with the Burma Star for his bravery during World War Two. I have absolute respect for such war veterans who fought to give us the freedoms we now enjoy. 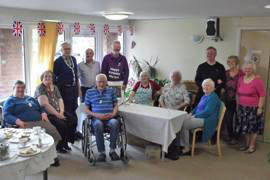 I was soon on the road again on Thursday, this time cycling 22 miles to Lady Eleanor Court in Abingdon where I was treated to a great evening which included music from accordion player and tenant Ian Giles. I also met tenants from nearby Ladygrove Paddock there.

Friday was another long day on the road but the welcome I got at Ferendune Court in Faringdon made it worthwhile. And once again I met the town’s mayor who signed the birthday card for the Queen. I estimate I will have more than 4,000 signatures by the time I get to The Clies.

My last port of call this past week was Beatty Court in Swindon who gave me such a lovely welcome. I was introduced to Jo Evans who is a big fan of the royal family and previously attended a garden party with the Queen at Buckingham Palace.