Tour de Terry-Week 4:Do you know where Hoola Hoops are made?

I had a lovely start to the week with a great reception at Vicarage Fields in Burton on Trent on Saturday 2 April.

I’ve visited 16 of Anchor’s 120 care homes on my tour so far and although they are all different, the one thing that ties them together is the wonderful care they give the older residents. 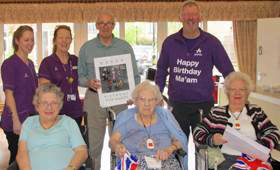 I have been truly humbled to see how these devoted staff care for vulnerable people with such tenderness. I thought I knew a lot about Anchor but this tour is really opening my eyes. Seeing Anchor people in action is overwhelming.

My first care home this week, which once again demonstrated this great care, was Landemere in Derby where I met one resident who was honoured by the Queen for her services to nursing.

I then visited the customers at nearby Heath Court who had put a lot of effort into raising more than £140 from tombolas, raffles and an art exhibition. I was really impressed.

As with other places, I left early without saying my last good byes which I always feel guilty about because everyone has always made me feel so welcome. So apologies if I sneak off at the crack of dawn everyone!

I cycled more than 47 miles on Wednesday which was exhausting. My first stop was Annesley Lodge whose staff had placed the words Welcome Terry above the door which was a lovely sight to see after such a long journey.

But a bigger surprise was waiting for me inside. Chef Manager Stuart Walker and his son, Allen, the home’s Deputy Chef, had made a huge cake which Stuart’s wife, Anne, had iced. 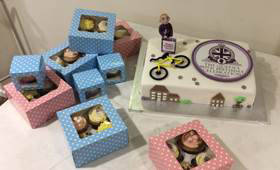 The cake was of me with my card and my bike with the official emblem of the Queen’s 90th birthday. The detail was fantastic. I was really touched by people’s kindness at Annesley Lodge.

But I was soon on the road again to reach my first hotel on the tour - in Ashby de la Zouch which I’ve never heard of but apparently Hoola Hoops are made here!

Feeling fully refreshed the next morning, I embarked on a 28-mile cycle in the driving rain, hailstones and head wind. It was awful weather! It made me even more grateful to get to Madeleine House care home in Stechford, Birmingham where they had even put a red carpet out for me. Very touching.

There were lots of activities happening, including a singalong and royal themed quiz. The resident leading the welcome party was Mary Turner who was crowned Queen for the Day.

Anchor’s Chief Executive Jane Ashcroft, who was also there, and her husband, Jonathan, then joined me cycling to Holmpark care home in Edgbaston, Birmingham. It was great having them with me, especially as they knew how to get from one Anchor location to the next.

Jane, Jonathan and I then cycled the short distance to Henbury Court for another wonderful welcome party which was where I stayed the night. 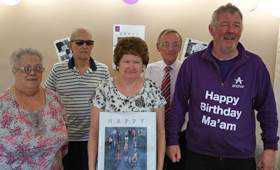 Thursday saw me cycle to Godiva Lodge in Coventry and then on to Leofric Lodge which is walking distance.

They had made such an effort and I received a lovely welcome speech from customer Philippa Elmer. Once again the local newspaper was there so I hope we’ll get an article in the paper highlighting the great work Grandparents Plus do.

I spent most of Friday on the road, firstly visiting Bell Walk in Rugby where I had my photo taken by the local newspaper and then I cycled to St Clements Court in Kettering where I was made to feel very special. They asked me, the Mayor and tenant Madge Bagot, who is 95, to plant a Queen Elizabeth rose bush in the grounds.