I had a very busy start to this week which marked the halfway point in the Tour de Terry.

I did a quick interview for BBC Radio Cambridge before leaving St Clements Court in Kettering on Saturday 9 April with cyclists Tim Cockerell and Julian Fryer, from Peterborough Cycling Club. 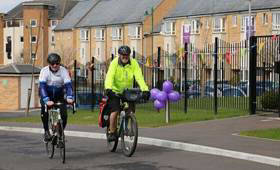 It was great cycling with them, not just for the company, but because they knew the way to get to Clayburn Court in Peterborough which is one of Anchor’s newest care homes.

The reception there was brilliant as were the delicious meals which I had on the two days I stayed there.

Monday marked the halfway point in the number of days I have been on the road so it was a double celebration when I arrived at Broad Leas Court in Huntingdon.

It was great to reach Day 29 and I’m feeling good. As I’m travelling further south, I feel more familiar with the territory. I’m really enjoying it and it’s such a privilege to be doing this tour, meeting so many lovely people and raising money for Grandparents Plus.

Everyone at Broad Leas Court, who raised £120, gave me a great welcome party in the sunshine with music from the different decades of the Queen’s reign and people dressed up from the 1920s when Her Majesty was born.

I cycled 33 miles on Tuesday to reach my first destination, Bilton Court in Wellingborough, which also marked me passing the half way point in number of miles I’ve travelled. By the time I reached the home, I had cycled 721 miles on my 1,400-mile tour.

It was a lovely reception at Bilton Court but I was soon on the road again – this time being joined by cyclist Darren from the home - for the short journey to Box Gardens in Wellingborough where there was a delicious spread and lovely people waiting for me. 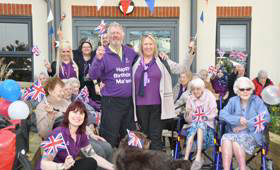 Thankfully, it was still sunny as I cycled down to Fulwell Court in Milton Keynes on Wednesday and made very good time right up until the GPS gave up on me so was slightly late. It was a lovely party and they raised £90 from their raffle.

Buckingham Lodge in Aylesbury provided me with such a wonderful welcome as well as one of my favourite meals, bangers and mash. Delicious!

I was soon on my way again to travel the 24 miles to St Andrews Court in Watford. On the way I was joined by Anchor’s Communications and Engagement Manager Mike Smith.

Friday was a very long, wet and tiring day. It started with a photoshoot with the Watford newspaper before I was making my way to Anchor’s London office in the rain.

Despite the really heavy rain, I was joined by Mario, Rebecca, Roger, Clytie, all from Anchor, and Lucy and Trevor, from Grandparents Plus, on their bicycles as we made our way to Norton House in Westminster via Big Ben and the Houses of Parliament. 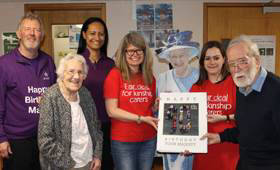 Roger and Mario continued to cycle in the rain with me to Silk Court in Bethnal Green where there was a delicious afternoon tea waiting for me. Five members of Grandparents Plus were also there to explain to everyone the great work the charity does.

I then went over to the London Live studios in Kensington to do a live TV interview - my first on this tour.

I arrived late at Greenhive in Peckham but had a warm welcome from a number of residents and staff members Edith and Leila, who had worked late so that they could welcome me to the care home.

They had even painted me a banner welcoming me. Resident Mavis Stewart MBE gave a moving speech and it was great to meet again War Veteran Maurice Herron and Ann Daltrop who I appeared alongside for the photo for the front of the Queen’s birthday card.

After a long and tiring seven days, I arrived at my final destination this week, Clifton Court in Peckham at about 10pm for a good night’s sleep.