I can’t believe that after 49 days on the road I’ve finally reached The Clies in Helston – 1,500 miles from King James Court in Berwick Upon Tweed where I set off on 14 March. 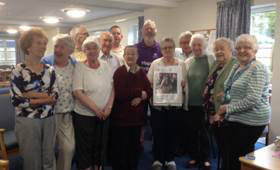 And it’s definitely been a full on last week with once again extremes in weather conditions. As I sit here having escaped the Cornish mizzle (mix of drizzle and must)...., it seems strange to think that I had to take shelter at one point on Saturday 30 April as I couldn't see for snow! That's a first!

That Saturday saw me cycle to St Clements Court in Chippenham where I was met with the great news that they had raised £228. The local newspaper photographer was there, too, and he took some lovely photos.

I was then on the road again to Beaufort Court in Bristol where I stayed overnight.

Jacquie had joined me for the last week of the Tour de Terry and we were both invited to Sunday dinner with District Manager Claire Williams’s family. It was such a lovely occasion. We were joined by her husband, children, cousin, her husband and son, and Claire’s Mum and Dad. It was only the second time she had cooked for so many people and she did really well.

Bank Holiday Monday was a long day of cycling covering 44 miles, first popping into St Clements Court in Weston Super Mare and then on to the appropriately named Queen Elizabeth Court in Bridgwater for a great welcome party.

I had a lovely time at the welcome party at Malthouse Court in Taunton and whilst there, Jacquie and I were interviewed together on BBC Radio Somerset which was a first on this tour.

Thankfully, the sun continued to shine most of the latter part of last week and it was lovely by the time I reached Manor Court care home in Plymouth. 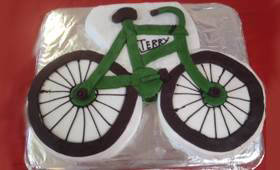 I was so touched because they had made a delicious cake in the shape of a bike with my name on it.

I then only had four more miles to go to reach my final destination on that day – Pattison Court, on the other side of Plymouth.

There I met Mrs Ernestine “Tennie” Falconar, who is 96 years old and has lived with Anchor for 23 years. It’s great that older people in their nineties can still live independently with the help of a scheme manager.

The welcome party at St Anne’s in Saltash was amazingly busy, particularly as the residents were joined by many members of the local community, including MP Sheryll Murray, the former mayor, the current mayor and the deputy mayor. The highlight of the day was the home’s barbecue.

On Saturday I cycled to Kimberley Court in Newquay where I met lots of interesting people before I cycled off to The Battery for a barbecue. Thankfully the sun shone all day.

So on to yesterday - the final day of the Tour de Terry and the return of the rain! I had a lovely reception at Chyventon where I was treated to a cream tea.

Make sure you put jam on the scones first and then the clotted cream in Cornwall  but it's the other way round in Devon.

And then it was on to The Clies in Helston, my final stop, where there was a huge party. 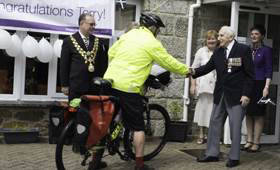 Anchor Chief Executive Jane Ashcroft and her husband, Jonathan, and Helston's Town Mayor were there as was my wife Jacquie and Tour de Terry Manager Simon Peyton.

I also spent time chatting with WWII veteran Reg Hunt who was wearing his medals.

It's been fun, hard work and tiring but such an experience that has shown me the great work Anchor staff do as well as the interesting older people living with them.

Terry Keen, 69, lives at Anchor's Willow Glade retirement housing scheme, and this spring has cycled 1,500-miles across England with a 90th birthday card for the Queen