Ken Gerry first fell in love with steam trains when he was just four years old.

He went for his first holiday from his south London home in Wandsworth to Dover, Kent where his grandmother lived. He stayed in an old miner’s house and the bedroom overlooked the coal trains coming and going, day and night. This fascinated him so much that he stayed up all night watching the trains coming and going and was immediately hooked.

Growing up Ken never lost his interest in trains but the time he dedicated to them was limited. He really enjoyed revisiting Clapham Junction station and alongside other enthusiasts, would track the numbers on engines but then new interests started taking up a lot more of his time, the first of which was meeting Brenda. 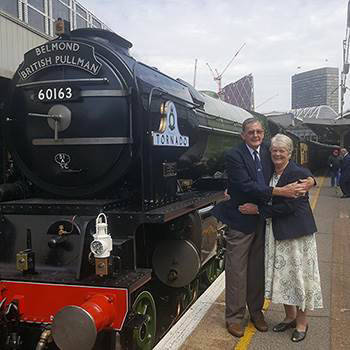 Ken was working in the police station in Hyde Park, London when the team received a call from four nurses in Wandsworth who were looking for some gents to take them for a drink and break up a dull evening. Ken and three of his fellow officers hotfooted it over to South London to meet the ladies. They had a great time but, leaving it three days to call, Ken almost scuppered his chances with the girl he had been speaking to, Brenda. After calling and calling where she worked, he was told in no uncertain terms she would not see him, he had missed his chance. Undeterred by this, Ken went to see her and said he would just sit and wait until her shift finished. Brenda eventually went down to see Ken and the rest, as they say, is history. Just three months later Ken and Brenda were engaged.

Life was busy for the couple, maintaining busy jobs and raising two boys. Ken’s interest in trains never dulled, but his priorities had changed. There wasn’t the time to take trips on new railways or marvel at restoration work. They did, however, take their children to Kent for a family holiday and from memory Ken, eventually, found the old platform on the now defunct railway he used to watch from the window of his grandmother’s house. The memories came flooding back of the very first night he watched the coal trains and became captivated by steam engines.

Since they have retired, the Gerry’s have had more time to dedicate to their now shared passion of trains. Having explored the North Yorkshire and North Wales railways, and putting Scotland firmly on their list of next stops, the Gerry’s are always keen for a new railway adventure. For Ken’s 60th birthday Brenda bought him a weekend away on the Kent and Sussex railway so that he could drive the train. For Ken’s 70th birthday Brenda bought him a North Yorkshire train trip to Whitby where the railway children was filmed. Train travel and experiences have become a hit for the couple when marking special occasions, as they are something they both enjoy and look forward to.

The apple of Ken’s eye when it comes to modern developments of steam trains is the Tornado which, having seen once, is the dream engine for him which he one day hoped to travel on. This is the only steam train that has been made in the present day to the exact specification of the old steam trains.

Anchor, the housing provider where the couple live, arranged to make this dream come true for Ken and Brenda, by organising a day trip with the British Pullman on the Tornado to celebrate their 50th wedding anniversary.

They set off from London Victoria on a trip around the Kent countryside in glamorous 1920s style aboard the Belmond British Pullman on Friday 27 May 2016.