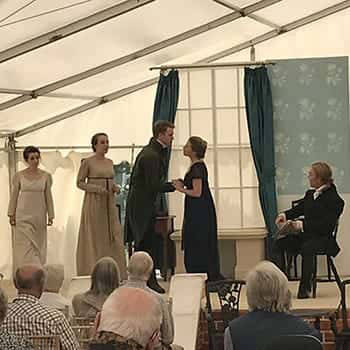 The Chapterhouse Theatre Company, which tours all over the UK, put on a superb two hour performance of the famous Jane Austen novel featuring actress Rowena Gray in the lead role of Elinor Dashwood. The play was performed in front of a specially invited VIP audience of 100 in the grounds of Bishopstoke Park.

Laura Turner, the writer who has adapted the novel for Chapterhouse Theatre Company, says: "Sense and Sensibility has always been my favourite of Jane Austen’s novels, and I was delighted to be asked to adapt the story for Chapterhouse’s 2009 summer season. It has been thrilling to now have the opportunity to see a whole new cast of actors take on the script and bring the characters to life, from the first performance back in June to the final showing of the summer season at Bishopstoke Park.”

Jake Reynolds, press officer at Chapterhouse Theatre Company, commented: "Audiences across the UK and Ireland have been loving this year’s production of Sense and Sensibility, and it’s a privilege to end the show’s summer season in the beautiful grounds of Bishopstoke Park.”

Gaye Collins, General Manager at Bishopstoke Park, said she was always looking for innovative ways of generating interest in Anchor’s New Developments, while at the same time providing outstanding entertainment for residents.

She said: "This was an absolutely unique occasion for us, with the guided tour of our flagship premises, some really nice food and drink before and after, and then capped by this wonderful performance of Sense and Sensibility. I was so impressed with their total professionalism and it just seemed to be the perfect fit for what we are trying to achieve here in Bishopstoke Park."