Two deputy managers from Birkenhead Court care home in Birkenhead rated outstanding by the regulator are leading a campaign to encourage men to consider a career in care.

Ben Macdougall, 35, and Brian McNaught, 29, who work at Anchor Hanover’s Birkenhead Court in Challis Street, Bidston, decided to launch the campaign after they found out the care sector will face a shortfall of one million carers by 2025 to look after the country’s ageing population.

The pair are part of the team from Birkenhead Court which received the outstanding rating from regulator the Care Quality Commission earlier this month.

Alongside providing top quality care, the home was commended for having its own pub, sweet shop, which is used for reminiscence sessions, cinema, library and indoor garden, all of which were created by another male member of staff, Caretaker Paul Todd.

Anchor Hanover’s research found many reasons for the shortage of male carers, including 71% of parents saying they wouldn’t encourage their children to think of it as a career worth pursuing while 35% of people think working in a care home is a ‘woman’s career’.

The study found 67% think a career in social care is undervalued by society with the majority of people in the UK valuing nurses, doctors, firefighters, police and celebrities more than someone working in a care home. 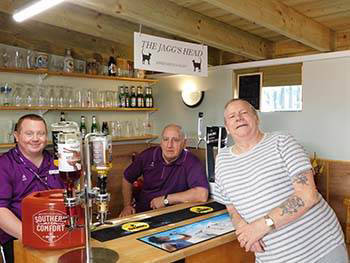 Ben, who has progressed his career at Birkenhead Court, being promoted from Cook to Team Leader to his current post of Deputy Manager, said: “The care sector has some incredible opportunities for men and with more men receiving care there is a high demand for male carers.

“The personal satisfaction my job gives me outweighs any other profession I can think of. Being able to support older people to make massive differences in their lives is so rewarding. And my promotions mean I’m developing my career at the same time.

“There’s lots of free training which is ongoing so I’m able to do my job well as part of a team who are committed to providing top quality care. And that’s why we were rated outstanding by the CQC.

“I’m so proud of what we have achieved. We work hard every day to help older people get the best out of life and now we have been recognised by the regulator for this.

“I would recommend working in a care home to any men because it’s helped me progress and I haven’t looked back!”

Friend Brian, who started in the care sector as an apprentice and has been promoted many times in his 11-year career, said the support of his manager, Mary Hardy, and extensive training had helped him make a success of his job.

He said: “Care is extremely rewarding and satisfying because I’m making a difference to people’s lives. We are not an emergency service with bright yellow helmets or green uniforms, but we are saving people’s lives. Without doing what we do, many residents would be suffering or possibly worse.

“You gain knowledge and skills that a lot of men aren’t exposed to. Friends look to me for advice and support with their relatives because I’m passionate about my job and because I work in an outstanding care home.”